GM to Invest $2 Billion in U.S. Plants, Depending on Tax Breaks 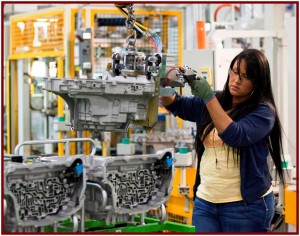 According to the nonprofit Center for Automotive Research, which released a new study to coincide with the announcement, the “ripple effect” would add almost $2.9 billion to the U.S. Gross Domestic Product and create or retain more than 28,000 jobs.

General Motors Company said Tuesday it will invest about $2 billion in “U.S. assembly and component plants retaining more than 4,000 jobs at 17 facilities in eight states.” GM Chairman and CEO Dan Akerson made the announcement during an event at a 54-year-old Toledo, Ohio Transmission Plant. Toledo is being upgraded to build 8-speed automatic transmissions.

During the next few months, GM said it will make specific facility investment announcements dependent on successful completion of state and local incentives in some communities. Critics, of course, say the cost per job – when you total all the loans, tax breaks and tax loss carry forwards at GM and Chrysler that normally are wiped out during bankruptcy – is exorbitant, especially since what is mostly going on these days is the retention of existing jobs. (See also Ford will invest $400 million in its Kansas City Assembly Plant)

“This new investment is on top of $3.4 billion and more than 9,000 jobs that GM has added or saved since mid-2009,” Akerson said. Critics of the unpopular auto bailouts say these are misleading numbers since taxpayers advanced $50 billion to reorganize a bankrupt General Motors during the summer of 2009. U.S. and Canadian taxpayers still hold 41% of General Motors. It’s estimated that the stock must trade at about $50 a share for taxpayers to get all of their money back.

According to the nonprofit Center for Automotive Research, which has long standing ties with GM and released a new study to coincide with the announcement, the “ripple effect” of the planned investments would add almost $2.9 billion to the U.S. Gross Domestic Product and create or retain more than 28,000 jobs.

General Motors last week announced a 2011 Q1 profit of $3.2 billion, or $1.77 per fully-diluted share, marking the company’s fifth consecutive profitable quarter since it emerged from bankruptcy.  Revenue increased $4.7 billion to $36.2 billion, compared with the first quarter of 2010.

The General Motors results were not as strong as they appeared at first glance because special items increased profits by $1.5 billion or $0.82 per fully-diluted share. GM stock is currently selling at under $32 a share, below the initial IPO price of $33 last November. (See General Motors Posts 2011 Q1 Profit of $3.2 Billion. Results Almost Doubled by One Time Sales of Ally and Delphi Preferred)

“We are doing this because we are confident about demand for our vehicles and the economy,” Akerson said.

GM’s U.S. sales through the first four months of the year are up 24.8% compared to 2010, which is outperforming the average growth in the U.S. market of  20%. (See General Motors April U.S. Vehicle Sales Increase of 27%)

The first of the new investments — $131 million and about 250 additional jobs in Bowling Green, Kentucky — was announced last week. Plant improvements and installation of new equipment to make the next generation Chevrolet Corvette will begin soon while the current-generation Corvette is assembled for at least the next two model years.

“The UAW’s goal has been to return all laid-off workers to active status and see the company begin hiring again,” said Joe Ashton, UAW vice president – GM Department. “These announcements will create and retain thousands of jobs and bring General Motors back to full employment of our hourly workforce.”

The United Auto Workers union has 1,357 members on layoff waiting for jobs at GM, UAW Ashton said. Akerson said that once those workers are recalled, GM will start hiring people to fill the remainder of the 4,000 jobs.