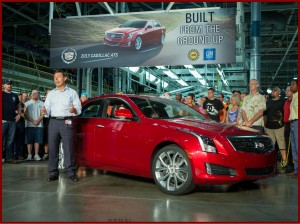 The compact Cadillac ATS had its second good month to start the year.

General Motors said today that it sold 224,314 vehicles in the United States in February, up 7% compared with a year ago. Retail sales and fleet sales were both up 7%, matching expected overall market growth. GM’s fleet sales were 25% of the total, equal to a year ago. This was best February since 2008 at 268,737 units when the market was trending down and GM was headed for bankruptcy. The Seasonally Adjusted Annual Rate back then was about the same as today at 15.6 million light vehicles.

All four GM brands posted higher year-over-year sales: Cadillac was up 20%; Buick was up 15%; GMC was up 10%, and Chevrolet was up 5%. Sales of GM’s full-size pickups were up 28% to 58,039 units, led by Chevrolet Silverado at 42,000, a 29% increase year-over-year.  All truck sales were up 14%, but car sales were down 4%, with Chevy Malibu, Cruze and Sonic posting declines. Overall, incentives were down, and transaction prices increased for the month, according to GM.

Of note was the sales increase at Cadillac. Cadillac retail sales year-to-date are the brand’s highest since 2006. Cadillac XTS (2,169) conquest sales are running at more than 40%, with the Jaguar XJ and Lincoln MKS the top trade-ins, according to GM. The ATS (3,382) had its strongest sales months since launch and it now Cadillac’s best-selling car.  More than three-quarters of ATS buyers are new to Cadillac, nearly 60% are new to GM. GM claimed that top trade-ins include the BMW 3-Series and Lincoln MKZ.

The Cadillac CTS, along with the redesigned Buick LaCrosse and Regal, will be unveiled at the New York International Auto Show later this month.