Good and Bad? January US Light Vehicle Sales Down -3% 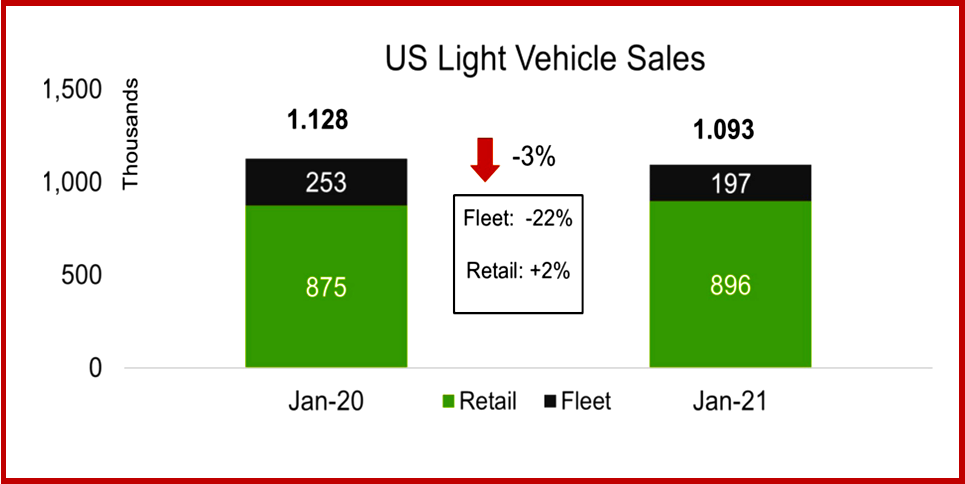 With a 16.6 million unit selling rate, January Light Vehicle US sales were slightly higher than expected. However pandemic worries and the hangover from the Trump administration’s mishandling or ignoring the Covid 19 crisis continue to create great uncertainty in a vital industry that can only react slowly to economic and consumer mood swings. Light Vehicle sales totaled 1.09 million units in January in the US, down by just 3% YoY, on one fewer selling day. The annualized rate of 16.6 million units was the highest since the beginning of the pandemic. SUVs accounted for 54% of total sales, with Compact and Midsize Non-Premium SUVs being the two most popular segments across the industry, according to consultancy LMC.

Projections for 2020 Global Light Vehicle sales ended at 77.7 million units, down -14% from 2019 and with a stronger recovery than expected initially. LMC maintains that 2021 is poised to continue the recovery, with volume projected at 86.5 million units, up 11% from 2020. AI thinks while the past isn’t a 100% sure predictor of the future, the new – perhaps more virulent strains of the Covid virus, the nationalistic fights over vaccines, the emergence of fascism and sedition in the US,  and stricter and ongoing social controls in most major market are huge risks. Significant shares of the public in the U.S., France, Germany and the UK say their lives have changed because of the COVID-19 outbreak, according to a new Pew Research Center survey. (See AutoInformed on IndustriALL Global Union – Labor Will Defend US Democracy, Global Auto Business Threatened by Covid Second Wave, IndustriALL Global Union – Labor Will Defend US Democracy)

In January transaction prices remained high, incentives were lower, and some high-volume models face low inventories, first because plants were shut down to avoid the spread of the coronavirus and now due to the semiconductor shortage.

Consistent with most of the months during 2020, retail sales were behind January’s performance. Retail deliveries grew by 2.4% YoY, but fleet sales were down, though they are recovering. In January, fleet accounted for 18% of total sales, 3.4 percentage points more than in December – and again, the highest since Q1 2020, when fleet averaged 24.4% of sales. Nevertheless, fleet deliveries in January, sinking by 22.3% YoY.

With January ending slightly ahead of expectations, LMC’s attention has moved to the remainder of Q1, with the uncertainty associated with the current semiconductor shortage. With two fewer selling days, Light Vehicle sales in February are forecast by LMC to pull back slightly to a selling rate of 15.6 million units and a YoY volume decline of -13%. The retail sales recovery will continue to outpace that of fleet, February retail sales are expected to be down by just 6%, while fleet sales are expected to be down by more than 30%. The first quarter is currently on target for an average selling rate of 15.9 million units, 1 million units better than a year ago.

“The forecast is a balancing act between continued strength in pent-up demand and optimism in the vaccine rollout with the harsh reality that the short-term risk remains elevated given the lean level of inventory, further pressure from the semiconductor shortage and, of course, the pandemic itself. However, thus far, there is no evidence that these risks have yet caused any measurable disruptions to the topline sales recovery track, but some individual models have experienced weaker-than- expected sales,” said Jeff Schuster, President, Americas Operations and Global Vehicle Forecasts, LMC Automotive.