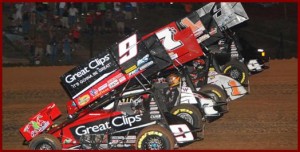 The World of Outlaws had no immediate comment, nor, apparently did it have a replacement tire sponsor lined up.

In a terse statement this morning, the Goodyear Tire & Rubber Company and the World Racing Group announced today that Goodyear would not continue as the official tire supplier of the World of Outlaws Sprint Car Series beyond the 2012 season.

The surprise announcement ends Goodyear’s three-year sponsorship of sprint car racing in what is arguably the most competitive racing series run on dirt. Goodyear, of course, has been racing for more than 100 years going back to Henry Ford in 1901. Supplying tires for the Outlaw series is complicated with one tire with four different compounds on the right rear. The left rear comes in four sizes and compounds. The front tires have three different compounds.

“We wish the World of Outlaws continued success in the future,” said Justin Fantozzi, marketing manager for Goodyear Racing in a statement. Fantozzi was previously a sales manager for dirt and asphalt track racing tires at Goodyear.

The World of Outlaws had no immediate comment, nor, apparently did it have a replacement tire sponsor lined up, or at least ready to announce. Goodyear’s 58-year sponsorship of NASCAR continues through 2017 and it remains active in a wide variety of racing programs.

Ken Zino is an auto industry veteran with global experience in print, broadcast and electronic media. He has auto testing, marketing, public relations and communications expertise garnered while working in Asia, Europe and the U.S.
View all posts by Ken Zino →
This entry was posted in auto news, racing and tagged auto informed, autoinformed.com, automotive news, goodyear, Ken Zino, racing, world of outlaws. Bookmark the permalink.