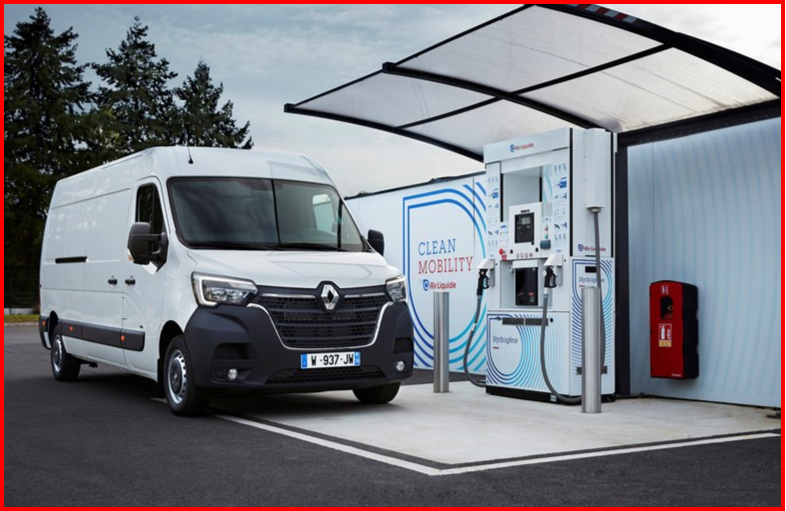 Renault is following Daimler AG, which will offer a fuel-cell sport utility vehicle that has a battery to help get it to rare hydrogen refueling stations.

The hydrogen fuel cell provides the additional energy for up to 3 times more range than 100% electric vehicles, with a charging time of only 5 to 10 minutes. However, the crucial WLTP emission certification is not yet completed.

Hydrogen at Renault is a complementary offering to its electric and hybrid lines, to provide a new solution  – or hedge – for access to city centers in an ever-tightening regulatory environment spurred by planet destroying global warming.

“These vehicles provide professionals with all the range they require for their long-distance journeys as well as record charging times. And the advantages do not stop there, as Renault Master Z.E. Hydrogen and Renault Kangoo Z.E. Hydrogen can run on decarbonized energy that respects the environment while offering all the comfort of electric driving,” claimed Denis Le Vot, Alliance SVP, Renault-Nissan LCV Business Unit.

Hydrogen electric vehicles operate with a fuel cell, which combines hydrogen from its tanks with oxygen from the air to produce electricity to power the electric motor. A key advantage is these vehicles meet the new environmental and regulatory challenges of urban mobility. In addition, they offer increased autonomy, hydrogen recharging from 5 to 10 minutes and – in theory – easy maintenance.

The expensive hydrogen technology was developed in partnership with Symbio, a Groupe Michelin subsidiary. The vehicles are equipped with a range extender fuel cell providing electric and thermal power of 10 kW, increasing the range of Renault Master Z.E. Hydrogen and Renault Kangoo Z.E. Hydrogen to more than 350 km or 230 miles.

The Renault Master Z.E. Hydrogen will triple the range from 120 km to 350 km and will be available in van (two versions) and chassis cab (two versions). Equipped with two hydrogen tanks located under the car body, the vehicle has no compromises on a load volume from 10.8 cubic meters to 20 3 with an additional weight of 200 kg.

Automakers in the EU – and ultimately globally – are being forced to offer zero-emission vehicles to comply with new regulations to cut emissions. The current preferred choice, of course, is a battery-electric hybrid system. Toyota and Hyundai sell hydrogen light-commercial vehicles. Renault is following Daimler AG, which will offer a fuel-cell sport utility vehicle that has a battery to get it to rare hydrogen refueling stations. Daimler said last year that it is “systematically preparing for series production of the Mercedes-Benz GLC F-CELL. The practical and family-friendly SUV will be produced at the Mercedes-Benz plant in Bremen.”