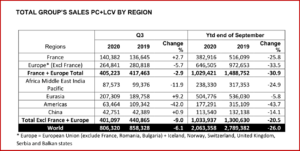 While Q3 2020 saw a slight recovery in the global automobile market with a -4.0% drop compared with a -28% decline in the first half of the year, Groupe Renault under-performed at 806,320 vehicles sold – down -6.1% compared with the third quarter of 2019. The Renault brand continues to nurture electric vehicles and is now accelerating the launch of the E-TECH hybrid and plug-in hybrid line-up in Europe as automakers are designing to government regulations, not customer demand.

“This third quarter highlights the change in our commercial policy, which now focuses on profitability rather than volumes.” Our EV performance, our E-TECH hybrid models which have been very well received…” claimed Luca de Meo, CEO of Renault. Group revenues reached €10,374 million (-8.2%) in the quarter. The assertion comes as Covid-19 patients in hospitals in Europe is still less than half of the peak in March and April, but it is rising  each week, according to data from the European Centre for Disease Prevention and Control. People across much of Europe — including larger countries like France, Italy, Poland and Spain — are now more likely to be hospitalized with Covid than those in the US. 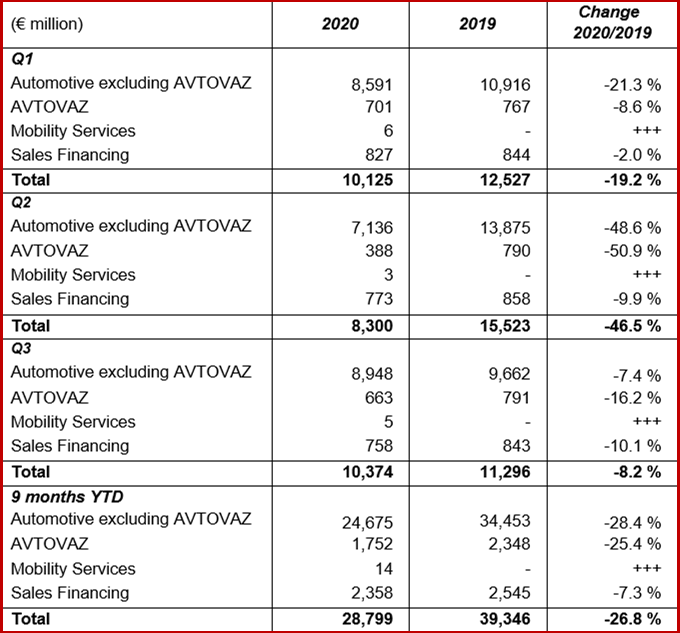 In a European market down -5.0%, the Group maintained its good momentum, with 405,223 units sold in the third quarter (-2.9%). Market share increased by 0.2 points to 10.3%. Sales of the Renault brand rose 0.8% thanks to the success of Clio, Captur and ZOE, each lead in their respective categories. Sales of the Dacia brand were down -9.9% mainly due to a high comparison base in the third quarter of 2019.

The Renault brand is the European leader in electric vehicles in a market up 107.2%. ZOE is the best-selling electric vehicle, with sales up 157.4% to more than 27,000 units over the quarter

Outside of Europe Group sales were down -9.0%, hurt by a -50.9% drop of sales in Brazil due to the strong fall of the market and a change in the commercial policy favoring profitability over volumes.

In Russia, Groupe Renault’s second largest market, LADA was up 4.5% over the quarter in a market up 3.7%. Groupe Renault is the leader with 28.8% market share, driven by LADA Granta and LADA Vesta, the two best-selling vehicles on the market.

In Turkey, in a market experiencing a strong recovery (+178.0%), Groupe Renault increased its sales by 131.1% in the third quarter compared with 2019.

Automotive excluding AVTOVAZ revenues amounted to €8,948 million, down -7.4%. This decrease is from a drop in volumes (-6.8 points), partly due to inventory adjustments.

Automotive activity on September 30, 2020 held €15.2 billion of liquidity reserves which include the €5 billion credit facility agreement benefiting from the guarantee of the French State of which €3 billion euros have been drawn down by the end of September 2020. Liquidity reserves were down €1.6 billion from June 30, mainly due to the seasonality of working capital requirements and debt repayments. Nonetheless, Groupe Renault should achieve a positive Automotive operational free cash flow for the second half of the year.