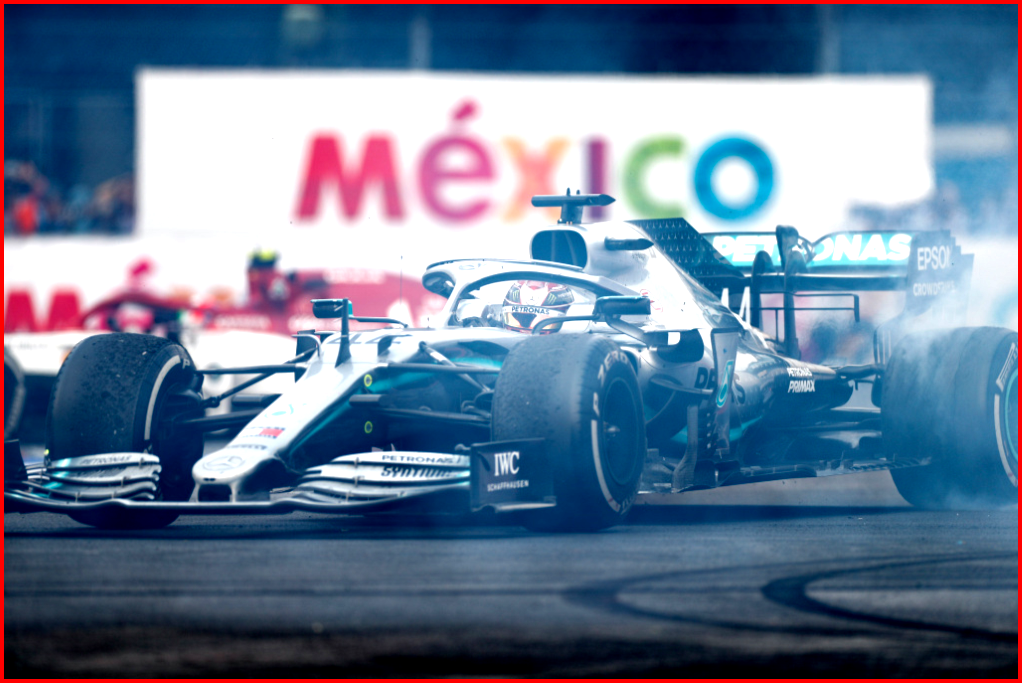 Sunday’s result marks the eighth podium for Lewis at the United States Grand Prix, breaking Michael Schumacher’s record for most podiums at the race.

The stars at night were big and bright deep in the heart of Texas for Mercedes driver Lewis Hamilton who clinched his 6th world championship in the Lone Star state yesterday after an amazing demonstration of maintaining control and nursing worn tires for miles and miles of Texas until he crossed the finish line in second place after starting fifth on the grid.

Hamilton started the race from fifth place, his lowest grid spot of the season, but after the start he quickly was in the top three as both Ferrari drivers had dreadful starts. Sebastian Vettel was passed by Verstappen into Turn 1 and Charles Leclerc was passed by Hamilton.

Further back, Red Bull’s Alec Albon collided with Carlos Sainz and the Thai driver was forced to pit at the end of the lap. He took on medium tires, rejoined in P20 and then began a crawl back through the order.

Vettel, meanwhile, reported “crazy understeer” after the start and by the end of lap one he was down to P7 as both McLaren’s Lando Norris and Renault’s Daniel Ricciardo rushed past.

By lap 8 the Vettels’s race was over. As he ran over the curbs in Turn 8, The Ferrari’s rear right suspension collapsed. He managed to maintain control and pulled over at the side of the track.

By lap 12 Bottas led with a three-second gap to Verstappen, with Hamilton a further eight tenths of a second behind. Hamilton now began to close on the Red Bull driver and at the end of the following lap Verstappen put on fresh hard tires and rejoined in P4 ahead of Renault’s Daniel Ricciardo.

Mercedes responded to Verstappen’s stop by pitting leader Bottas at the end of the following lap and he rejoined in P3, just ahead of the Dutchman. Both quickly powered past the much slower Leclerc and resumed their battle in P2 and P3 respectively.

Further back, Albon made a second stop, for medium tires, on lap 20 and dropped back to P15. He once again started a move up the order and by half distance he was back into the points, in ninth place.

Hamilton, though, stayed on track and nursed his starting medium tires until he was at last passed by Bottas on lap 24. Hamilton pitted and after switching to a set of hard tires he rejoined in third place behind Max Verstappen.

Ahead, Bottas now led Verstappen by six seconds, with Hamilton a further 11 seconds back in P3. Leclerc was now a lonely fourth, some 25 seconds off Hamilton and 14 seconds clear of Ricciardo. The McLarens of Norris and Sainz were now sixth and seventh and respectively and after dismissing Pierre Gasly and Sainz, Albon found himself in P7. His next target was Norris and within two laps he’d caught his fellow rookie. He then made quick work of reclaiming his starting position of sixth with a good move past Norris into Turn 1.

With his tires fading, Verstappen was now beginning to fade from leader Bottas. On lap 35 Verstappen put on a new set of medium tires. Mercedes again countered the move by pitting Bottas at the end of the next lap and as Hamilton once again assumed the race lead as Bottas emerged in P2.

Bottas then began to close on Hamilton and by lap 50 the Finn found himself within DRS range of his team-mate and began to attack. His first effort was rebuffed, but with five laps remaining there was nothing Hamilton could do as Bottas used DRS on the back straight to power past on the inside and reclaim the lead.

As Hamilton’s pace dropped on fading tires, Verstappen stalked. With two laps left the Dutchman got to within DRS range of the championship leader, but though he pushed to find a weakness, Bottas crossed the line to take his fourth win of the year, and Hamilton took second to wrap up his sixth Formula 1 World Drivers’ title, the Red Bull driver was forced to settle for third place.

Behind the top three, Charles Leclerc finished a distant fourth, some 52 seconds behind the race winner. Albon finished fifth after once again dropping back following a third pit stop for soft tires late in the race. Sixth place went to Ricciardo with Norris seventh ahead of team-mate Sainz. Nico Hulkenberg took an extra two points for Renault with ninth place and the final point on offer went to Racing Point’s Sergio Pérez.

As noted, it was Hamilton’s his sixth World Championship title and the team’s ninth 1-2 of the 2019 season leaving Ferrari an also ran against Mercedes-AMG Petronas Motorsport (695 points) with Ferrari (479) trailing by 216 points in the Constructors’ Championship.

Ken Zino is an auto industry veteran with global experience in print, broadcast and electronic media. He has auto testing, marketing, public relations and communications expertise garnered while working in Asia, Europe and the U.S.
View all posts by Ken Zino →
This entry was posted in racing and tagged auto industry commentary, autoinformed.com, automotive blog, formula one, Kenneth Zino, Mercedes-AMG Petronas Motorsport. Bookmark the permalink.