Is the Tesla Bubble About to Burst? 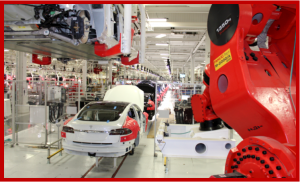 Investors and analysts will be watching the Model X launch closely as Tesla continues to burn cash at a significant rate.

Not surprisingly, the stock market is wary. Tesla stock has dropped for three straight days since the results – more than -5% on Thursday, almost –7% on Friday, and on Monday morning, it was trading down -9% at $236 per share.

Revenue remains threatened going forward by a strong U.S. dollar that hurts the revenue accruing from exported cars, as well as a contracting Chinese economy where luxury car sales are contracting. Tesla has now cut its production forecasts for the balance of 2015 and 2016.

Tesla is playing a “beat the reaper” game for the next couple of quarters. During Q2 Tesla went through $359 million in cash – using non-GAAP accounting. The Silicon Valley startup and wanna be auto company with ambitions of selling 500,000 electric vehicles annually in the near term had only $1.15 billion cash on hand as of June 30, down from $2.67 billion in the same period last year.

What is next is the planned launch of the Model X crossover starting this September. We are now targeting deliveries of between 50,000 and 55,000 Model S and Model X cars in 2015.

“While our equipment installation and final testing of Model X is going well, there are many dependencies that could influence our Q4 production and deliveries,” cautioned CEO Elon Musk. “We are still testing the ability of many suppliers to deliver high quality production parts in quantities sufficient to meet deliveries.”

In a longer-term bet, Tesla said it would start modest production of Tesla Energy products during Q3 at its Fremont factory, with a plan to increase production in Q4. As a result, Tesla forecasts that Q3 services and other revenue will barely increase, and gross margin will be comparable toQ2. Tesla wants to expand Tesla Energy battery module and pack production at the Gigafactory in Q1 2016 on a more automated line, where construction “remains on plan.”

Investors and analysts will be watching closely.

Ken Zino is an auto industry veteran with global experience in print, broadcast and electronic media. He has auto testing, marketing, public relations and communications expertise garnered while working in Asia, Europe and the U.S.
View all posts by Ken Zino →
This entry was posted in electric vehicles, financial results and tagged autoinformed, autoinformed.com, elon musk, Ken Zino, tesla. Bookmark the permalink.