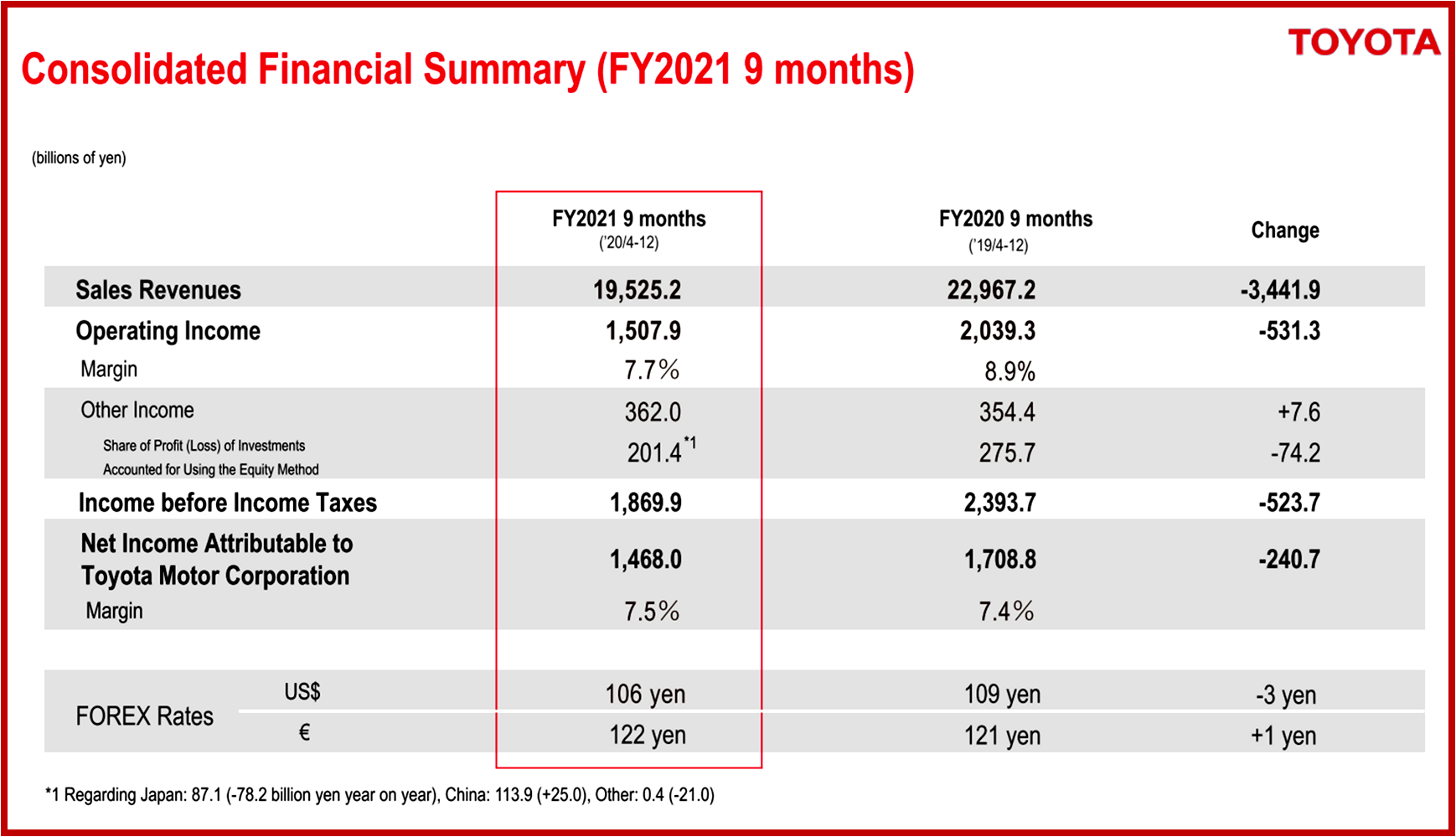 Toyota Motor, the world’s largest automaker posted a $9.87 billion Q3 FY Profit compared to $9.45b during the same period one year ago. This appears to AutoInformed a Toyota herd immunity from the Covid-19 virus and variants that are killing other automakers. As a result of the strong showing upholding Akio Toyota’s vow to remain profitable despite the ongoing Global Pandemic, Toyota increase its yearly forecast by 54%. Toyota now predicts a record operating profit $19.13 billion (¥2 trillion), surpassing an earlier projection of ¥1.3 trillion.

Toyota thinks it will sell 9.73 million vehicles this year, up 3.3% from the old forecast of 9.42 million. Nonetheless, this is still a decline from last year’s 10.46 million  – a drop that other global automakers would welcome. If this were an endurance race, competitors are still making repairs in the paddock, as Toyota continues to smoothly run the course. 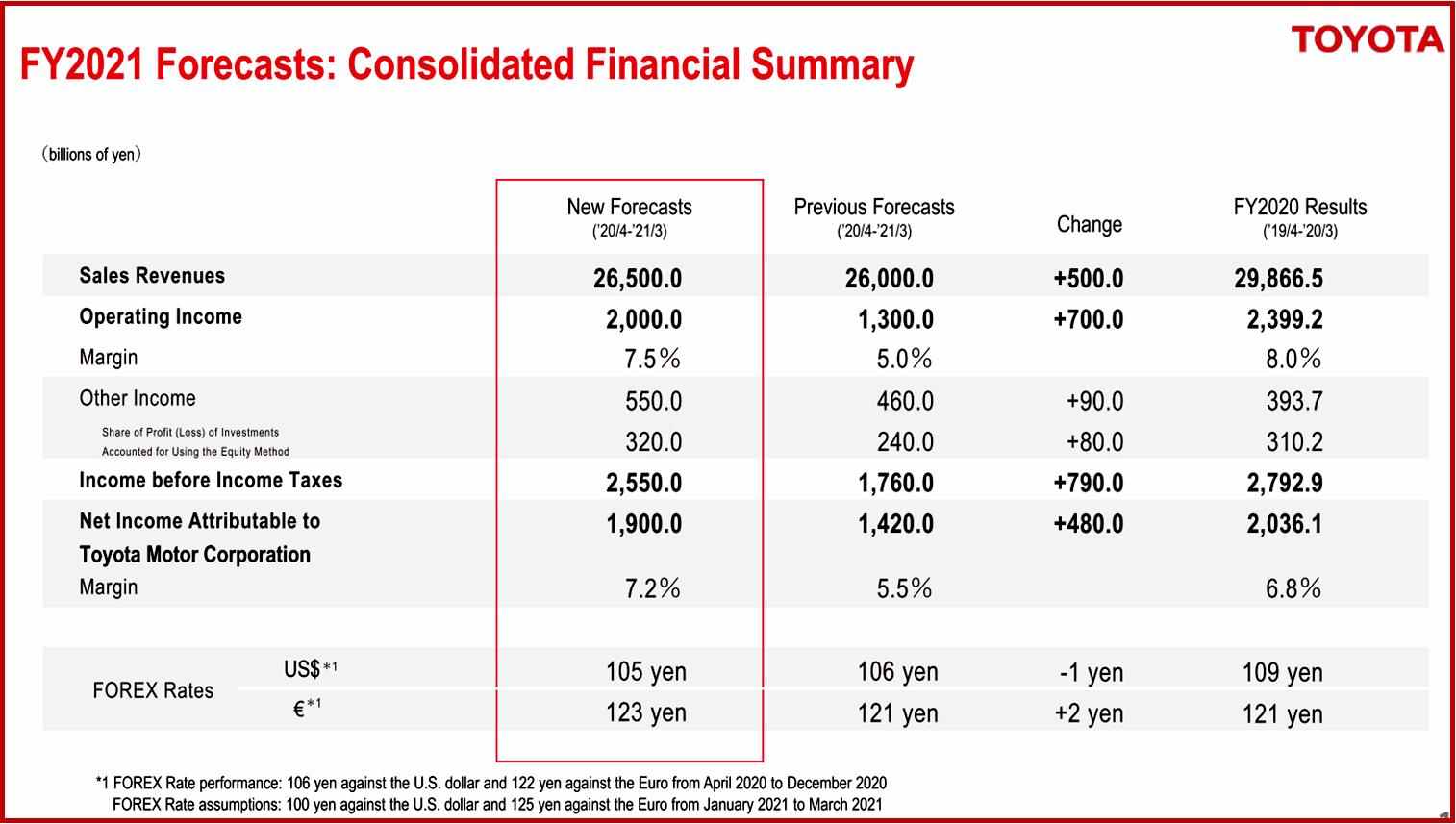 Toyota began U.S. production in 1986 when it started manufacturing Corollas at its joint venture, New United Motor Manufacturing, Inc. Since that time, Toyota has grown to include 10 plants in the U.S. and 14 in North America. Toyota affirmed this commitment by pledging to invest $13 billion in the U.S. over a five-year period starting in 2017 through 2021. The company hit this target a year early.

Extensive factory and showroom closures in the spring pulled Toyota global sales down -21% in the first half of last year. However, sales reversed in September and were up 10% year-on-year by December. Revenue for the latest quarter rose 8% to ¥8.2 trillion, compared with an average prediction for ¥7.6 trillion, according to Bloomberg.

Operating profit rose in all regions for the quarter, with sales in China and the U.S. boosted by new vehicle launches and a revamped model mix, Toyota Chief Financial Officer Kenta Kon said on a webcast briefing.

Each month since August, Toyota has produced a record number of vehicles. In 2021, it plans to make an unprecedented 9.2 million cars globally, up 2% from its 2019 pre-pandemic output, the Nikkei reported last week. 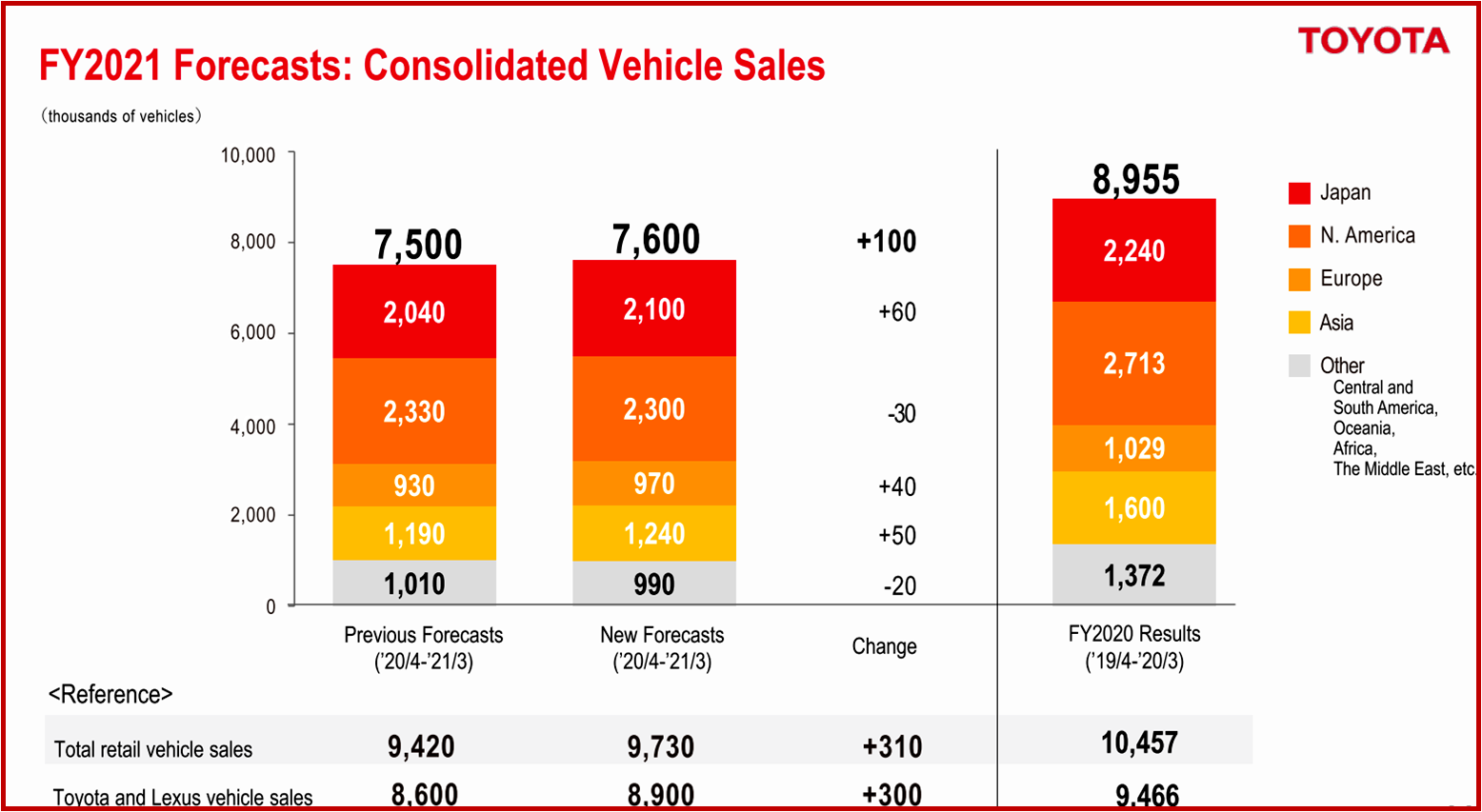 Toyota on the results webcast last night also claimed it was not expecting a global chip shortage to hurt its production unlike other automakers.

“For the near term, we do not see any decrease in production volume due to the chip shortage, but we do see risks of a chip shortage,” Chief Financial Officer Kenta Kon said during the briefing from Japan. Kon said Toyota has been constantly providing its short-term and long-term production plans to suppliers.