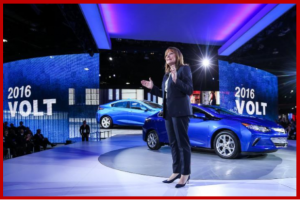 Volt is a technological triumph for GM, a company many wrote off. CEO Mary Barra, above, knows the auto business is a long-term game, and she has the hardware and the guts to play it successfully.

Chevrolet Volt, the best selling plug-in in the U.S., is undergoing a significant redesign for its Gen 2 version that debuts during the second half of this year. Since its debut of 2015, more than 73,000 Volts have been sold. Along the mostly ‘gasoline free’ Volt way, that is 80% of a driver’s time on Gen 1 is spent running on electricity, Volt also earned the highest customer satisfaction ratings in the business, and the highest conquest rate at GM’s Bow Tie brand.

Now here comes Volt Gen 2, a heavily revised design that has an advantage the original Volt team did not have – data from actual customer use. These are among the most studied auto buyers in the world and they are vocal about what they like and what they do not.

The new Volt has better gas mileage, greater range, faster acceleration, a fifth seat of sorts, and an all-new propulsion system. Pricing, yet to be announced, could be the deciding factor in Volt’s sales future. Former GM CEO Dan Ackerson, a venture capitalist, when he predicted astronomical sales had no idea that this is a long-term ~2030 play.

The Volt’s new, efficient propulsion system has an estimated total driving range of more than 400 miles, and with regular charging, owners are expected to travel more than 1,000 miles on average between gasoline fill-ups. In warm weather states, say 75 degrees F ambient, 1500 miles between fill-ups is possible. Aside for Volt’s impressive green credentials, this is likely a strong selling point. 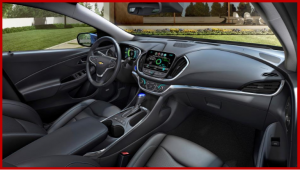 Volt retains dual digital color displays with an eight-inch reconfigurable screen in the cluster to relay driver information. An additional eight-inch touch screen in the center of the IP controls the Chevrolet MyLink system.

In the interim, the key question is can Volt “expand into the market,” as chief engineer Andrew Farah told AutoInformed. The answer depends on GM’s pricing. It is clear that the engineers took significant cost out of the new Volt. Does GM want to pocket the money or do they want to sell more. We will not know until later this year.

However, GM introduced a pure EV this morning at NAIAS possibly indicating that the 2016 Volt will be priced above the so-called Bolt EV concept – a long-range all-electric vehicle designed to offer more than 200 miles of range starting around $30,000.

“The Bolt EV concept is a game-changing electric vehicle designed for attainability, not exclusivity,” said General Motors CEO Mary Barra. “Chevrolet believes electrification is a pillar of future transportation and needs to be affordable for a wider segment of customers.”

Now, back to the future Volt that is going on sale later this year: Farah is a no-nonsense engineer who is smart enough not to redesign the whole hybrid using the Volt team. He relied on far more expert GM engineering teams to supply, among other things, a new 1.5-liter four-cylinder engine or the structure of the A-pillar. (I will not bore you with an extended list.)

Instead, Volt engineers, interior and exterior designers concentrated on the things that make a Volt, well,  a Volt. The upshot is a higher voltage Volt that represents and engineering tour de force in my view, not unlike Toyota’s pavement-breaking Prius that still allows Toyota to dominate the hybrid market.

GM’s arguably industry-leading battery technology is refined. The 2016 Volt uses an 18.4 kWh battery system with revised cell chemistry developed in conjunction with LG Chem. While total storage capacity has increased, the number of cells has decreased from 288 to 192 as a result of a revised chemistry. The cells are located lower in the pack for a lower center of gravity and the overall mass of the pack is 21 pounds (9.8 kg) lighter.

Ken Zino is an auto industry veteran with global experience in print, broadcast and electronic media. He has auto testing, marketing, public relations and communications expertise garnered while working in Asia, Europe and the U.S.
View all posts by Ken Zino →
This entry was posted in new vehicle and tagged autoinformed, autoinformed.com, bolt, Ken Zino, naias, volt. Bookmark the permalink.