Posted on 8 October 2012 by Kenneth Zino 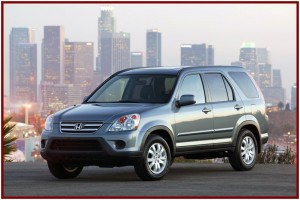 Honda is experiencing something similar to Toyota’s well-publicized quality meltdown, but so far it hasn’t hurt new vehicle sales at either automaker.

Honda is recalling 500,000 CR-V models globally because an electric window switch from Omron can melt and cause an interior fire. This is in addition to a recall in March for the same problem on other CR-V and Pilot models. At least five fires have been reported. In the U.S., the latest quality gaff covers model year 2002-2006 CR-V passenger vehicles manufactured from February 2002 through July 2006, potentially have the defective driver-side power window switch that may fail or melt.

Honda is telling owners to park outside because a switch failure and a fire could happen even when the vehicle is not in use. The automaker recalled more vehicles during 2011 than any other automaker operating in the U.S. and has three major safety recalls in the last month.

Honda will notify owners, and dealers will inspect and repair the switches, as necessary, free of charge as is required by U.S. safety regulations. The safety recall is expected to begin in November. Owners may contact Honda at 1-800-999-1009 about recall number is S61. Owners may also contact the National Highway Traffic Safety Administration Vehicle Safety Hotline at 1-888-327-4236 or go to www.safercar.gov.