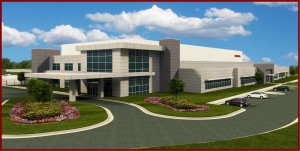 The new hanger will be able to work on as many as 12 HondaJet aircraft simultaneously.

Honda Aircraft Company has started construction on a new Maintenance, Repair & Overhaul facility (MRO) located at its world headquarters on the Piedmont Triad International Airport in North Carolina. The 90,000 square-foot building will be completed next year, with occupancy slated by the second half of 2013, prior to the delayed sales start of the HondaJet.

The ~$5 million HondaJet has claims to what could be advances in aircraft design, including a unique over-the-wing engine-mount that is said to improve aircraft performance and fuel efficiency by reducing aerodynamic drag. However, this claim awaits FAA-certified production aircraft powered by two new design GE Honda HF120 turbofan jet engines. The small business jet market has long been dominated by Wichita-based Cessna, of course, which pioneered the idea of turbofan engines and manufacturer-supplied maintenance – and guaranteed costs for owners – in business aviation with its successful Citation line starting in the 1970s.

Site preparation for the $20 million hanger began in February 2012 on a 54-acre extension  at the Honda Aircraft site that is home to R&D, production and headquarter buildings now covering more than one-half million square feet of space on 130 acres.

With the addition of the new hanger, Honda Aircraft’s total capital investment for construction in the area is said to exceed $120 million. The new Honda site will be able to work on as many as 12 aircraft simultaneously. There will be several back shops for repair of composite materials, sheet metal, avionics and interiors, as well as a customer area with a pilot’s lounge, individual work rooms with conference space, and a flight planning room near the aircraft ramp side entrance. 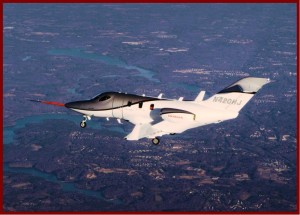 Honda can expect fierce competition from the long time market leader Cessna when its small jet finally goes on sale.

“We continue to make great strides as our momentum builds toward important milestones from type certification to our most important goal of delivering the HondaJet to customers around the world,” said Honda Aircraft Company president and CEO Michimasa Fujino.

Ken Zino is an auto industry veteran with global experience in print, broadcast and electronic media. He has auto testing, marketing, public relations and communications expertise garnered while working in Asia, Europe and the U.S.
View all posts by Ken Zino →
This entry was posted in auto news and tagged auto informed, autoinformed.com, automotive news, business jets, hondajet, Ken Zino. Bookmark the permalink.