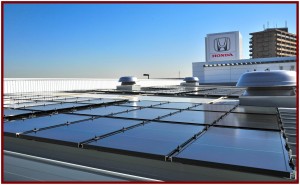 Honda sales are increasing but emissions are decreasing. The Japanese automaker is in the process of introducing a new generation of powertrains that it claims will be the most efficient in the industry.

The eighth annual Honda environmental report just released for the North American region show that the Japanese automaker reduced its output of CO2 with corresponding increases in fuel economy. During the 2012 fiscal year that ended last March, the CO2-adjusted fleet-average fuel economy of Honda and Acura vehicles sold in the U.S. in model year 2011 rose 0.8 mpg, or 3.2%, to 25.7 mpg, compared to the previous model year. This compares to an increase of 0.2 mpg, or 0.4%, to 22.8 mpg for the total U.S. light-duty vehicle fleet during the same period, although it should be note that Honda does not sell relatively less efficient pickup or work trucks whose sales have been recovering form the 2008 market crash.

During the last year, Honda also estimated that 6 million pounds of CO2 emissions caused by the transportation of parts from North American suppliers to Honda plants in the region were avoided through strategic planning and other “green logistics” initiatives.

Honda’s CO2 emission intensity of automobile production in North America, at 695 kg/unit, was down 2.0% versus a fiscal year 2001 baseline and reduced 4.5% compared to year-ago levels, primarily as a result of less carbon-intensive electricity supplies, the Number Three Japanese Automaker said.

The energy intensity of automobile production –from electricity and natural gas consumption, representing approximately 96% of total energy use – was down 4.4% from the 2001, but was up 2.7% versus the previous fiscal year.

Waste to landfills from manufacturing operations was reduced 96.5% from the 2001 baseline and 57% from the year-ago results to a total of just 1,000 metric tons. Landfill waste per unit of automobile production fell 96.8% from 2001 levels and 48% from the previous year’s results to just 0.8 kilograms per automobile.

The CO2 emissions intensity of transporting service parts to Honda’s U.S. dealers was reduced 23.8% over a four-year period (2008 to 2012), including a reduction of 5,076 metric tons in 2012. American Honda also achieved zero waste-to-landfill for one of its nine U.S. parts distribution facilities as 10 of its 14 North American manufacturing facilities have already achieved zero. The company also established the Environmental Leadership Award “green dealer” program for its U.S. Honda and Acura automobile dealers.