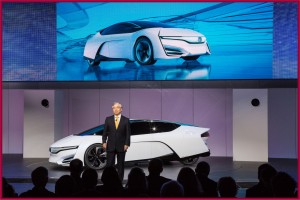 The Honda FCEV Concept or fuel cell electric vehicle made its world debut today at the Los Angeles International Auto Show. A production version is due in the U.S. and Japan in 2015, followed by Europe.

Honda’s next generation fuel cell-electric vehicle has what is for the moment the world’s first fuel-cell powertrain packaged completely in the engine compartment of the vehicle. This not only allows more interior space, but it gives the Japanese automaker some flexibility in the use of fuel cell technology in different vehicle types if the technology ever becomes affordable.

Significant technological advancements are claimed with the fuel-cell stack providing a 60% increase in power density (not output numbers though ). The size of the stack is 33% smaller compared to the one used in the current FCX Clarity test sedan. Honda predicts a driving range of more than 300 miles with quick refueling of three minutes at a pressure of 70 MPa. 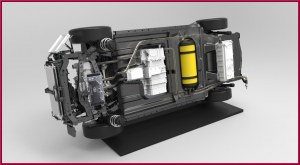 Toyota also says it also has developed a small, lightweight fuel cell stack and two 70 MPa high-pressure hydrogen tanks placed beneath a specially designed body, that can accommodate up to four occupants. Fully fueled, the vehicle can provide enough electricity to meet the daily needs of an average Japanese home (10 kWh) for more than one week.

The Toyota FC Stack has a power output density of 3 kW/L, more than twice that of the current “Toyota FCHV-adv” FC Stack, and an output of at least 100 kW. In addition, the FC system is equipped with Toyota’s high-efficiency boost converter. Increasing the voltage has made it possible to reduce the size of the motor and the number of fuel cells, leading to a smaller system offering enhanced performance at reduced cost. Toyota is planning a limited production 2015 rollout in Japan and the U.S. like Honda.

Honda began leasing its first-generation FCEV, the Honda FCX, in 2002. It is running prototypes in the U.S. and Japan, including its successor, the FCX Clarity, which launched in July 2008.

“While this car is a concept, it points toward a very real future,” says Tetsuo Iwamura, president and CEO of American Honda Motor.

Ken Zino is an auto industry veteran with global experience in print, broadcast and electronic media. He has auto testing, marketing, public relations and communications expertise garnered while working in Asia, Europe and the U.S.
View all posts by Ken Zino →
This entry was posted in alternative fuels, electric vehicles, fuel economy or emissions and tagged autoinformed, autoinformed.com, fcev, fuel cell, Ken Zino. Bookmark the permalink.