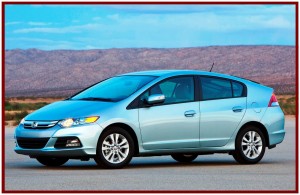 Honda will no longer be building its Insight Hybrid after this summer. Although Insight is the least expensive hybrid on the market, it has always been parked under the giant shadow cast by the market dominating Toyota Prius.

Honda’s hybrid product offerings in the U.S. remains with plans to expand the application of a two-motor hybrid system. The two-motor system, introduced on the 2014 Accord Plug-In Hybrid, is EPA-rated 50 mpg city Accord Hybrid, which is the most fuel-efficient rating for a 5-passenger sedan in the country.

The second generation Insight starting at $18,725 has EPA fuel economy ratings of 41/44/42 city/highway/combined. Introduced in the spring of 2009 to good reviews from the automotive media, the 5-door hatchback never caught on.

Back in November of 2011, Honda said it would lead in fuel economy in all classes its sells in by 2014 (Honda Claims it will lead in Fuel Economy in All Classes within Three Years. New EVs and Hybrids Coming). It will have a tough time making that goal since it is using the same technology that all other automakers are deploying. Japan’s third largest automaker also said it would reduce  CO2 emissions by 30% for all products sold worldwide by 2020, compared to Honda emission figures for 2000.

The Honda program is called “Earth Dreams Technology,” in a rough translation. It is actually a series of efficiency and fuel economy boosting measures for engines, and transmissions, as well as electric-powered motors using existing or emerging technologies. Variable valve timing, direct injection, the Atkinson cycle, hybrid vehicles, turbocharging and friction reduction are part of the plan’s proposed techniques.

Ken Zino is an auto industry veteran with global experience in print, broadcast and electronic media. He has auto testing, marketing, public relations and communications expertise garnered while working in Asia, Europe and the U.S.
View all posts by Kenneth Zino →
This entry was posted in electric vehicles, sales and tagged autoinformed, autoinformed.com, earth dreams technolgy, hybrids, Ken Zino. Bookmark the permalink.