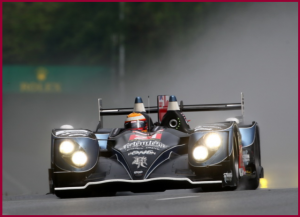 One key indicator that the economy is recovering is the increase in racing activity at automakers after extreme pullbacks in 2008 and 2009. The latest example comes from Honda Performance Development, the racing arm of American Honda, which is continuing its customer LMP1 endurance sports car racing with the 2014 introduction of an all-new, turbocharged V6 engine.

A revised rules package being introduced for WEC in 2014 means HPD has to introduce this new powertrain system for its private teams engaged in top-level endurance racing. This league is not for the slow or under financed because there are competitive privateer teams running from Porsche, Ferrari, Aston Martin and Chevrolet Corvette and running fast.

Honda will not compete directly in endurance racing against Toyota, which has been racing factory hybrid cars in the fastest, most expensive P1 class for two years against Audi, which has dominated endurance racing in recent years with diesel cars. Things get more competitive and expensive  when Porsche returns to endurance racing next year with a multe million euro factory effort. (Honda Returns to Formula One Racing in 2015)

HPD will follow the 2014 introduction of the V6 in 2015 with a range of energy recovery options, as required by revised racing rules for the FIA World Endurance Championship, best known for the 24 Hours at Le Mans. Stateside, Daytona, Sebring and Watkins Glen are hard fought endurance events going back to the post WW2 era.

After several successful seasons supplying the normally aspirated Honda LM-V8 engine to private teams in both the WEC and American Le Mans Series, HPD engineersmade the decision to offer partner teams updated technology, which the company believes will be necessary to successfully compete under the ACO’s new LMP1 energy-based powertrain regulations.

HPD takes part in both the American Le Mans Series (the company took all manufacturer, engine, team and driver awards in the 2012 ALMS LMP1 and LMP2 categories) and the FIA World Endurance Championship, winning the inaugural LMP2 World Championship in 2012, along with the 24 Hours of Le Mans. 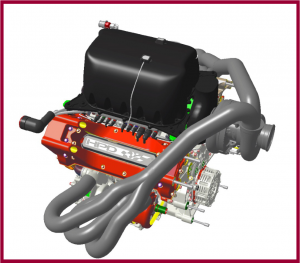 Starting in 2014, rather than any set engine displacement or air inlet restrictor limits, the technical regulations for the series specify a maximum fuel-flow rate into the engine.

The new engine, designated Honda HR22T, is based on the same architecture used in the Indianapolis 500 winning, 2.2-liter direct injection turbocharged V6 engine used in IndyCar competition since 2012. (Honda has scored 202 race victories in IndyCar since 1994 and is currently in a close fight with Chevrolet for the maker’s title.) HR22T is designed to be coupled with a new energy recovery system developed in concert with HPD partner Magneti Marelli. Honda has not revealed what types of energy recovery will be offered – battery electric hybrid and flywheel electric systems are in current racing use.

Starting in 2014 the FIA rules are completely different and allegedly designed give all types of systems the same lap times. The competitive edge will come from the efficiency of the systems and therefor the number of pit stops required, Steve Eriksen, HPD Vice President and COO told AutoInformed at Traverse City.

“A small-displacement, direct injection, turbocharged engine with a range of energy recovery options will provide private teams with the technical sophistication they need to compete under the challenging new LMP1 regulations,” Erickson said.

Starting in 2014, rather than any set engine displacement or air inlet restrictor limits, the technical regulations for the series specify a maximum fuel-flow rate into the engine, with or without energy recovery systems.

“The new rules say that if you are a private team, you can either run without energy recovery systems or choose to add the level of energy recovery that best suits your needs. This will allow our customers to choose the ERS solution that meets their needs – everything from no energy recovery up to the full eight Megajoule maximum,” Eriksen said.

In addition to the new engine and its energy recovery system, HPD and chassis technical partner Wirth Research are also developing a coupe version of the successful ARX chassis series that will provide a fully integrated solution for the new V6 Honda powerplant and ERS.

The most recent wins for the ARX came in last weekend’s American Le Mans Series event at Canadian Tire Motorsports Park in Bowmanville, Ontario, where Muscle Milk Pickett Racing won overall in an LMP1 ARX-03c, while Level 5 Motorsports claimed the LMP2 class with an ARX-03b.

Honda cancelled its F1 program and severely cut back its R&D operations – both racing and production cars – as the Great Recession took hold in 2008. Honda’s F1 return is only partial, though. The last time Honda went F1 racing, it developed, built, crewed and raced the entire season on its own. From 2014, new F1 regulations require the introduction of a 1.6-liter direct-injection turbocharged V6 engine with energy recovery systems. The opportunity to develop these powertrain technologies through the challenge of racing is central to Honda’s decision to participate in F1, according to Japan’s third largest automaker.

Ken Zino is an auto industry veteran with global experience in print, broadcast and electronic media. He has auto testing, marketing, public relations and communications expertise garnered while working in Asia, Europe and the U.S.
View all posts by Ken Zino →
This entry was posted in racing and tagged autoinformed, autoinformed.com, CAR Management Briefing Seminars, hpd, Ken Zino, le mans. Bookmark the permalink.