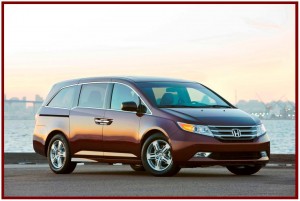 Defective adhesive used by supplier Pilkington releases the window from its bracket.

American Honda is recalling 2,800 model-year 2011 Odyssey vehicles in the U.S. to replace the side window glass in one or both of the front doors. It was the second Odyssey recall of the month, following an earlier one to replace a front windshield wiper linkage rod that could break.

Honda said in a statement that there is the potential for one or both Odyssey windows to become detached from the window regulator, causing the window to become inoperative and preventing it from being rolled up or down. In the worst case, the window may bind and shatter onto the occupants, as has been reported in one case. No accidents or injuries have been reported so far related to this defect.

The latest Honda recall follows a recalls this year on Honda Civic Hybrid models for electrical problems and other civics for fuel pumps earlier this month; on Honda Fit models for engine stalling in February; as well as one in January on thousands of 2010 Honda Accord cars and CR-V sport utility vehicles, which can also suddenly stall, increasing the potential for accidents.

Notification to customers will begin in mid-April 2011. In addition to contacting customers by mail, in mid-April, owners of these vehicles will be able to determine if their vehicles require repair by going on-line to www.recalls.honda.com or by calling Honda at (800) 999-1009, and selecting option 4.