Honda Returns to Formula One Racing in 2015 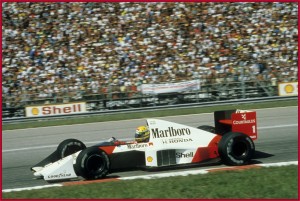 During the 1989 Brazilian Grand Prix, local hero Ayrton Senna qualified on the pole in a McLaren-Honda, but finished two laps down in the first race of the season. He went on to finish second in the Driver’s Championship to Alan Prost after a bitter controversy about a race in Japan.

Honda Motor will establish a European satellite racing operation in Milton Keynes, United Kingdom in preparation for its 2015 return to the Formula One World Championship after a seven-year hiatus. As previously announced, Honda will rejoin F1 via a joint venture with McLaren  as the supplier of engines and energy recovery systems.

Honda cancelled its F1 program and severely cut back its R&D operations – both racing and production cars – as the Great Recession took hold in 2008. Honda’s return is only partial, though. The last time Honda went F1 racing, it developed, built, crewed and raced the entire season on its own.

From 2014, new F1 regulations require the introduction of a 1.6-liter direct-injection turbocharged V6 engine with energy recovery systems. The opportunity to develop these powertrain technologies through the challenge of racing is central to Honda’s decision to participate in F1, according to Japan’s third largest automaker.

The new facility will rebuild and maintain the power units developed at Honda R&D center in Tochigi, Japan. Honda will also base its trackside support operations from the new European office. This office will be located in the new engine research and development center of Mugen Euro Company starting during June of 2014.

However, the development and manufacture of Honda’s racing power units will take place at the R&D center in Tochigi, Japan. In a statement, Honda said the U.K. is an ideal support location. It is the home of McLaren; many F1 suppliers are U.K. based. During 2013, 7 of the 19 Formula One races are in Europe.

“With the confirmation of a new F1 operation base in U.K., our preparation to join F1 has become more specific and concrete. To meet and exceed the expectations of our fans, we will accelerate our development to bring back the unique Honda engine sound onto the track,” Yasuhisa Arai, Chief Officer of Motorsports at Honda R&D.

Honda in Formula One

Ken Zino is an auto industry veteran with global experience in print, broadcast and electronic media. He has auto testing, marketing, public relations and communications expertise garnered while working in Asia, Europe and the U.S.
View all posts by Ken Zino →
This entry was posted in auto news, racing and tagged autoinformed, autoinformed.com, f1, formula one, honda, Ken Zino. Bookmark the permalink.