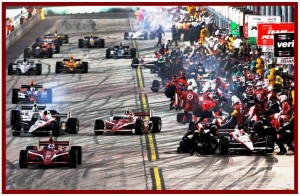 An innovative solution keeps the race car in neutral while the hose is attached.

American Honda has revealed a refueling safety interlock system designed to reduce the potential for pit fires and injuries caused by drivers pulling out with the hose still attached. An accident that resulted in serious injuries during an American Le Mans Series race in 2008 prompted Honda Performance Development (HPD) to start working on a safety system that prevents engagement of first gear while the car is still refueling.

Honda is providing every team in the IZOD IndyCar Series with this interlock safety device, free of charge, and will provide its design, free of charge, to other racing series that request it.

“Every year, as a result of human error or mechanical malfunction, there are instances of drivers leaving their pit boxes while the refueling hose is still attached to the car,” said Roger Griffiths, technical director at HPD. “All of these incidents create the potential for a fire in the pits and injuries to the driver, crew members, or others in the pit-lane area.”

The fueling interlock consists of a new fuel-probe electronic sensor installed in the refueling “buckeye” – or inlet valve – on an IndyCar chassis. When the sensor detects a connection between the pit-lane refueling nozzle and the buckeye, software in the Engine Control Unit signals the Gearbox Control Unit to place, or hold, the transmission in neutral, and prevents the driver from driving off before the refueling hose is detached from the car.

Developed throughout the 2009 and 2010 racing seasons, the Honda system has been tested during IZOD IndyCar Series practice sessions and test days to address potential reliability issues, while HPD engineers worked to incorporate the new feature into the Honda Indy V8-powered Dallara chassis currently used by all teams in the series.

Honda has racing in  North American open-wheel cars since 1994, and has played an active role in the growth of the IZOD IndyCar Series – as both a Manufacturers’ Championship competitor and single engine supplier – since joining the series in 2003.

Honda scored its first Indianapolis 500 victory in 2004 with Buddy Rice; Manufacturers’ Championships in 2004 and 2005; and became engine supplier to the entire IZOD IndyCar Series in 2006. Honda has supplied racing engines to the entire 33-car Indianapolis 500 starting field every year since 2006, and for a record five consecutive years, there has not been a single engine failure in the ‘500’. The 2010 Indianapolis 500 marked Honda’s 100th race win as a manufacturer and engine supplier in IZOD IndyCar Series competition.

Honda Performance Development (HPD) is the Honda racing company within North America. Founded in 1993, and located in Santa Clarita, Calif., HPD is the technical operations center for high-performance Honda racing cars and engines. HPD is the single engine supplier to the IZOD IndyCar Series and was key to championship-winning efforts in the 2009-2010 American Le Mans Series, 2010 Le Mans Series and the 2010 24 Hours of Le Mans.