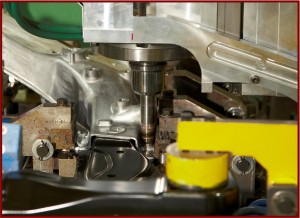 Honda, promising to lead once again in automotive fuel economy, says the new welding technology reduces body weight by 25% compared to a conventional steel sub-frame in widespread use at other automakers.

Honda Motor Company says it has a newly developed technology for the continuous welding of the dissimilar metals of steel and aluminum. The Japanese automaker once known for its fuel efficiency is now using the process for the first time on front sub-frames of a mass-production vehicle, the 2013 Accord. Honda said it would expand the application to other new models as they rollout. Honda plans to sell 350,000 Accords annually in the U.S. so the benefits are potentially significant. (See First Drive: Honda’s 2013 Accord – a Comeback Car?)

The process is well known in the auto industry – dubbed friction stir welding – but apparently, it has not been used for the continuous welding of steel and aluminum together. Honda claims the new technology generates a stable metallic bonding between steel and aluminum by moving a rotating tool on the top of the aluminum, which is lapped over the steel with high pressure. As a result, the welding strength becomes equal to or above conventional MIG welding, the welding technique most commonly used for the joining of identical materials such as steel-to-steel or aluminum-to-aluminum.

Honda’s ninth generation Accord is a technological tour de force that convincingly ends the debate about whether you need a V6 engine any longer given the significant advancements in power, fuel economy and overall smoothness that the latest generation Honda four-cylinder engine provides. With 185 horsepower, and 181 lb. ft. of torque the 2.4-liter direct-injection 4-cylinder engine is smooth and creates a pleasant exhaust rush at full throttle. Unlike many Honda engines, which are high revving motorcycle powerplants at heart, this four-cylinder is among the best car engines available. Weight reduction is part of the reason it feels so good.

Honda, which has vowed to lead once again in automotive fuel economy, says the new welding technology reduces body weight by 25% compared to a conventional steel sub-frame in use at other automakers. Honda, of course, is not the only automaker to be frantically pursuing increased vehicle, engine and electric motor efficiency – whether stated publicly or not – because of ever tightening global emission and CO2 standards. It is simply the price of survival.

The Honda efficiency program is called “Earth Dreams Technology,” in a rough AutoInformed translation. Whatever it is called, the program is actually a series of efficiency and fuel economy boosting measures for engines, and transmissions, as well as electric-powered motors using existing or emerging technologies. Variable valve timing, direct injection, the Atkinson cycle, hybrid vehicles, turbocharging and friction reduction are part of the plan’s proposed techniques.

With the new welding process, Honda also says that electricity consumption during the welding process is said reduced by approximately 50%. Other benefits claimed are a change in the structure of the sub-frame and the mounting points of suspension, which increases the rigidity of the mounting points by 20%, thereby contributing to the Accord’s dynamic performance, which AutoInformed after test drives has rated as remarkable.

Honda has also established what it says is a new method to apply this technology to mass-production vehicles. Conventionally, friction stir welding required the use of large equipment, but Honda developed its FSW continuous welding system that uses an industrial robot. This system also can also be used for aluminum-to-aluminum welding and therefore, the welding system can be used for production of a full-aluminum sub-frame if needed.