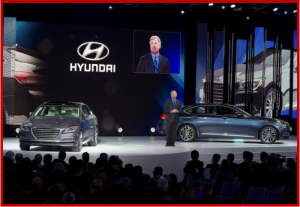 Today Hyundai introduced the Hybrid version of its seventh-generation Sonata at NAIAS. The 2016 Sonata Hybrid fuel economy is expected to improve more than 10%. Sonata Hybrid is projected to achieve up to 39 mpg in the city, 44 mpg on the highway and have a combined EPA mileage rating of 42 mpg.

There is a downsized 2.0-liter Nu GDI four-cylinder engine along with a six-speed automatic transmission that houses a more powerful 38 kW electric motor and clutch where the torque converter would normally be found.

It will be built at Hyundai’s Asan, South Korea assembly plant and go on sale early this summer.

Ken Zino is an auto industry veteran with global experience in print, broadcast and electronic media. He has auto testing, marketing, public relations and communications expertise garnered while working in Asia, Europe and the U.S.
View all posts by Ken Zino →
This entry was posted in electric vehicles, fuel economy or emissions, new vehicle and tagged autoinformed, autoinformed.com, Ken Zino. Bookmark the permalink.