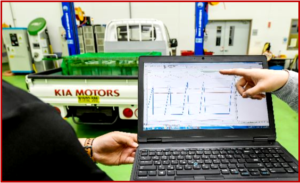 Hyundai Motor Group has shown a system that estimates the gross vehicle weight of a light-duty commercial electric vehicle and optimizes performance. The development is claimed as a first-ever for the industry, using acceleration sensors to optimize the vehicle’s settings based on current gross weight estimate. The technology is being considered by Hyundai Motor Group for use on future light duty electric commercial vehicles.

The ability to calculate the gross weight of a moving vehicle in theory means that an electric vehicle’s torque output can be optimized to maximize estimated remaining range. This reduces potential wheel spin and reduced traction when a vehicle is carrying less payload, increasing commercial efficiency. The new technology also allows for changes in torque output based on topography, altering the amount of torque needed to propel a vehicle uphill based on its gross.

“We are preparing for a future where we will be able to offer commercial EVs that operate at its optimum specifications under any given road condition and regardless of how much payload it is carrying. These vehicles will be very economical to operate,” said Chae Mo Yang, Group Leader of Eco-Technology Performance Development Group.

Hyundai Motor Group developed the gross weight estimation technology by utilizing acceleration sensors instead of weight sensors; developing the technology in this manner means that it can be applied to a vehicle not equipped with a costly air suspension system.

Using acceleration sensors, gross weight is estimated through Newton’s law of acceleration (F=MA). In short, the less mass and more energy put on matter, the faster speed it moves. When pushing an object at a constant speed, the weight of the object can be calculated depending on its acceleration rate.

The vehicle estimates the distance it can drive and adjusts its maximum torque output. Specifically, the potential vehicle range estimate is based on the accurate measurement of the current weight and speed of the vehicle, enhancing efficiency for commercial use.

For example, when the vehicle is carrying a heavy load, the vehicle automatically informs the driver of the estimated drive range to secure enough battery life to reach the destination safely.