Hyundai to Try to Make Genesis a Global Luxury Brand 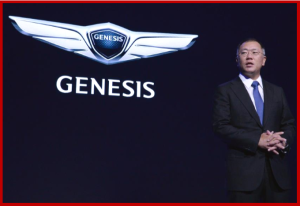 Hyundai Motor in Korea today announced an all-new global luxury brand, Genesis, an extension of its current luxury car. A six-model line-up begins to appear this December and will be completed by 2020.

Initially on sale in Korean, Chinese, North American and Middle Eastern markets, the Genesis brand will expand to Europe and other parts of Asia as the model range grows to full strength. 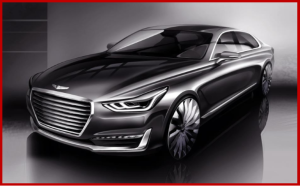 The launch of G90 is scheduled for early next month in Korea.

“Refined performance, athletic elegance in design and human-focused innovation” are claimed by Hyundai as the attributes that will change the Genesis brand. It is a daunting challenge for a nameplate that has always sold on price. Absent from the announcement was any reference to Kia, which also has a version of the $40,000 to $54,000 Genesis (awd and rwd), the fwd Cadenza, which fully equipped sells for $45,000 in the U.S.

Genesis models will be badged with a new wing-type emblem, redesigned from the version used on the current Genesis model. The Genesis brand will also adopt a new alphanumeric naming structure. Future models will be named by combining the letter ‘G’ for Genesis with a number, 90, 80 or 70 and so forth representing the segment.

To develop a distinctive and differentiated design for the new Genesis brand vehicles, Hyundai Motor has created a Prestige Design Division. From mid-2016 Luc Donckerwolke, who was previously responsible for the design of Audi, Bentley, Lamborghini, SEAT and Skoda models at the Volkswagen Group, will lead this new division alongside his role as Head of the Hyundai Motor Design Center.

The new Prestige Design Division will be overseen by Peter Schreyer, as part of his group-wide design responsibilities as President and Chief Design Officer (CDO) of Hyundai Motor Group.

Ken Zino is an auto industry veteran with global experience in print, broadcast and electronic media. He has auto testing, marketing, public relations and communications expertise garnered while working in Asia, Europe and the U.S.
View all posts by Ken Zino →
This entry was posted in marketing and tagged autoinformed, autoinformed.com, Hyundai Genesis, Ken Zino, luxury cars. Bookmark the permalink.