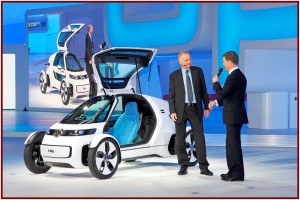 While optimistic auto executives gushed about their latest offerings at the IAA Frankfurt Motor Show, the Euro zone crisis continued. Greek and Italian debt threatens those nations with insolvency, and the negative effects will continue to spread throughout the entire European Community auto executives worry. French banking stocks are dropping precipitously over unknown exposure to the latest examples of profligate government spending. And political fighting between nations with strong economies and sustainable debt – notably Germany – and weaker ones shows no sign of abating.

The auto markets in the EC have declined for more than three straight years now and auto manufacturing remains well below the peak of more than 16 million recorded in 2007 before the collapse of the global financial markets caused the ongoing Great Recession. Worse, 2011 is thus far following the same downward trend. (See Passenger Car Sales Down in EU Again as Economy Struggles) It’s against this backdrop of political crisis and economic uncertainty that automakers are revealing cars at the Frankfurt Motor Show that are being dictated – or heavily influenced – by expensive EU regulations – with an emphasis on electric vehicles that will be required to meet impending EU CO2 standards. Little or no opposition is being voiced publicly by automakers to the EU central government dictating winners by offering subsidies and tax credits for what remain expensive, un-competitive vehicles. 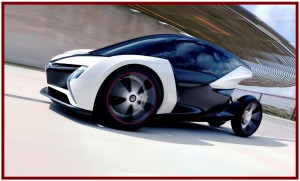 “We want to develop electric vehicles that everyone can afford,” said Karl-Friedrich Stracke, Opel CEO, at the world premiere in Frankfurt.

Weighing only 380 kg (838 pounds) the RAK e is about one third the weight of a current small car, which of course is ladened with government mandated safety and emissions equipment that RAK e lacks. Peak power output is 36.5 kW or 49 horsepower with 10.5 kW/14 horsepower continuously available. The useable battery capacity of 5 kWh – at least $4,000 at current costs – enables a range of 100 km (61 miles), which corresponds to fuel consumption of just 0.6 liters (0.16 gallons) of gasoline. Over an annual 10,000 km (6,214 miles) the RAK e’s energy consumption would be 525 kWh. This could be supplied by a five square-meter, 500-Watt solar panel mounted on the roof of the garage, Opel claimed.

Volkswagen showed the 2013 production version of the tiny VW Up!, which last appeared as an electric car concept two years ago at the IAA. The two-door, four seat small car at 3.54 meters is seven inches smaller than the Mini, and will also compete with Alfa Romeo MiTo, Fiat 500 and in Europe the Toyota iQ. Up is the beginning of an entire series of cars called by VW as the New Small Family. (No word on whether the VW Up! will come to North America.)

VW Up!’s power will be provided by new generation of three-cylinder gasoline engines, ranging in output from 44 kW (50 horsepower) to 50 kW (for a natural gas version) and 55 kW (75 horsepower). Combined fuel consumption including a Stop/Start system is said to be 4.2 l/100 km for the small motor and 4.3 l/100 km for the highest output one. Both of these 1-liter engines are said to emit less than the 100 g/km CO2.

There are those who maintain that an urban vehicle such as Up! is a contradiction in terms, and that includes the European Union or EU, which has announced plans to ban all conventionally fueled cars from cities by 2050. Not surprisingly this has resulted in a number of cars – real or in concept – that on paper at least could skirt the ban.

Enter the Volkswagen e-Up!. “It has been decided: a production version will launch on the market in 2013,” said  Dr. Ulrich Hackenberg, Member of the Board of Management for the Volkswagen Brand with responsibility for Development. 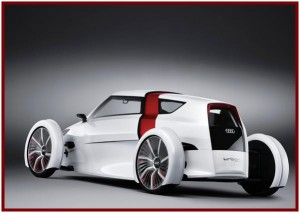 Urban Concept is not based on any previous model, all of which are too heavy to return any practical use from range-challenged battery powered cars.

There is also the Audi Urban Concept, another electric vehicle. Urban Concept is not based on any previous model, all of which are too heavy to return any practical use for range-challenged battery powered cars. Audi says that its development is solely oriented on the strict principles of lightweight construction and efficiency. One of the obvious moves is the eliminated of all but two seats, and those are staggered tandem, as in a sort of bicycle built for two. Two so-called e-tron electric motors provide the power as long as a charge remains in the lithium-ion battery pack that supplies the energy. 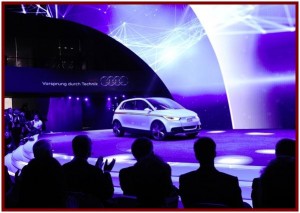 At least the A2 concept has the equipment customers want. Price will be a huge issue, especially without taxpayer subsidies.

More likely, perhaps, to reach production is the Audi A2 concept, yet another EV. The four-seat car weighs 1,150 kilograms (2,535 pounds), which means it might be possible to produce it with the features and equipment customers want. Whether it’s affordable is another matter. The lithium-ion battery pack mounted in the sandwich floor stores 31 kWh of energy- roughly $31,000 at current costs – 24 kWh of which are usable. The electric motor is transversely mounted in the front of the vehicle. It delivers 85 kW (116 horsepower) of peak output (60 kW continuous) and 270 Nm (199.14 lb-ft) of torque (160 Nm or 118.01 lb-ft continuous) to the front wheels via a single-speed transmission.

The Audi A2 concept has a range of 200 km (124 miles) in the European driving cycle. It takes roughly 1.5 hours to fully recharge the battery with an expensive 400 volt three-phase current and approximately four hours with 230 volt household current.