If Trump Closes the Mexican Border, the Entire U.S. Auto Industry Shuts Down in Days

Posted on 2 April 2019 by Kristin Dziczek 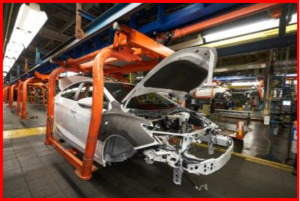 Final Chevrolet Cruze rolls off the line at GM Lordstown Assembly Plant in Warren, Ohio because GM is moving more production to Mexico.

President Donald Trump’s threat to close the U.S.-Mexico border to all trade would have an almost immediate and devastating impact on U.S. automotive and auto parts production and employment. The North American auto industry is highly integrated, and U.S. producers rely on over $112 billion in automotive and parts imports and nearly $36 billion in exports that crossed the U.S.-Mexico border in 2018. (see AutoInformed 2018 Auto Retail Sales Down. Transaction Prices Set Record)

There are few vehicles assembled in the United States that do not rely on Mexico for at least some parts content. Vehicle assembly is the quintessential “complete set” — an assembly plant cannot build a partial vehicle. Even if a few relatively minor parts are missing, automakers do not make a practice of storing the vehicles and then repairing them when the parts are ready. This repair work alone creates the potential for quality issues. Since it is impossible to do a partial build, the assembly plant and many of its associated supplier plants will be idle until the automaker can obtain sufficient stock to relaunch production.

Automotive parts are very customized to each vehicle. To move tooling and launch production from Mexico to a source in another location (assuming that source had open capacity) would take time. The U.S. auto parts industry is currently operating at nearly 80% capacity utilization, and there is not enough capacity to replace all the parts and components that the United States imports from Mexico.

While Mexico is a source for a wide range of vehicles and automotive parts, one critical part is the wiring harness. A wire harness is a bundle of miles of wires, connectors, and terminals that supply power and deliver information throughout the vehicle. Assembling automotive wiring harnesses is a highly manual process, and as such, there is very little of this production left in the United States.

Over 70% of all imported automotive wire harnesses come from Mexico and another 8-10% come from countries in Central and South America that would usually cross the Mexican border to the United States via ground transportation. You just cannot assemble a vehicle without a wiring harness, and nearly 80% of the wiring harnesses used in U.S. auto production cross the U.S.-Mexico border.

Closing down the U.S.-Mexico border to automotive trade would shutter most U.S. assembly lines and much of the parts industry within days. CAR estimates that every hour an assembly line is down costs the company about $1.3 million, and there are 54 major assembly lines in the United States, so every hour production is halted costs $70.2 million or about $5.6 billion per week in idled assembly capacity. The costs would amass quickly in the supply sector, as well.

While automakers and suppliers have complex risk and contingency plans to deal with other supply disruptions, none have a plan to displace all of what is currently supplied from Mexico. Contingency plans often center around targeted disruptions — such as the Meridian Magnesium fire that idled Ford F-series pickup production for about a week in May 2018, the Japanese tsunami that disrupted production for a few months in spring and summer of 2011, or the myriad of supplier bankruptcies that took place during the Great Recession of 2007-2009.

Healthy Auto Industry Is Vital to US Economy

U.S. automotive and parts production cannot be turned on and off at the flip of a switch. Whether the border shutdown is short-term or long-lived, bringing production back online will take months. The financial toll will be significant. Even a supplier that is based in the United States and uses no Mexican inputs in its production will suffer financially as all of their customers will be idled due to lack of parts from Mexico. Depending on the length of the shutdown, the financial harm to small suppliers could prove fatal to some if not several of these firms.

A healthy automotive industry is critical to a healthy U.S. economy. Given there are already signs of potential weakening in the economy, a total shutdown of the goods trade at the U.S.-Mexico border could push the U.S. into that recession that many economists have been warning us is on the horizon.

Kristin Dziczek is vice president for industry, labor and economics at the non-profit Center for Automotive Research in Ann Arbor, Michigan. Follow her on Twitter: @kdziczek