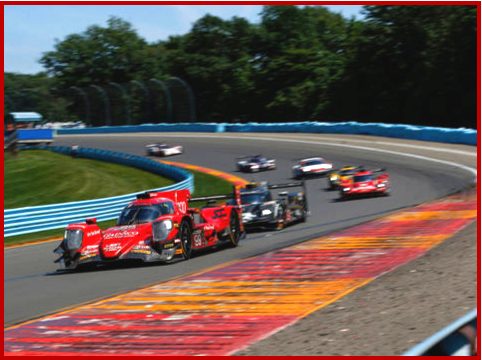 On the eve today’s two-hour, 40-minute America’s Tire 250 at WeatherTech Raceway Laguna Seca, the IMSA Technical Committee made craven changes to the LMP2 race cars that compete head-to-head with Daytona Prototype international (DPi) cars in the IMSA WeatherTech SportsCar Championship Prototype class. Welcome to the politics of racing – not one where racing improves the breed, but rather racing improves the IMSA pocketbook.

Since the current generation LMP2 cars began competing alongside DPi cars at the start of the 2017 WeatherTech Championship season, the only Balance of Performance (BoP) adjustments in the Prototype class had been made to DPi cars, with the goal of balancing all DPis to the best LMP2 example.

However, after three straight victories by LMP2 cars, the IMSA Technical Committee determined that adjustments to LMP2 cars now were necessary. Heading into next week’s race, 10 kilograms have been added to all LMP2 cars, and the fuel capacity in each LMP2 car is being reduced from 75 to 72 liters. In addition, all DPi cars will see an increase of two liters from their previous fuel capacity, and the Mazda DPi cars will see a 10-kilogram reduction in weight.

“We’ve seen the P2 platform develop in terms of performance,” said IMSA Senior Director, Technical Regulations and Compliance, Geoff Carter, who also serves as the chairperson of the IMSA Technical Committee. “Even though it’s a spec platform, we’ve seen the car and the performance increase as (the competitors have) become more familiar with them… We felt it was time to put a limit on the reference platform.”

The LMP2 cars that race in the WeatherTech Championship use the same technical regulations as they do in Automobile Club de l’Ouest (ACO)-governed series, such as the FIA World Endurance Championship and the European Le Mans Series. And while this BoP adjustment for LMP2 cars is unprecedented, it is also in compliance with the ACO-IMSA technical partnership.

“We’ve had freedom,” Carter said. “The only stipulation is that we don’t BoP between (LMP2) cars.”