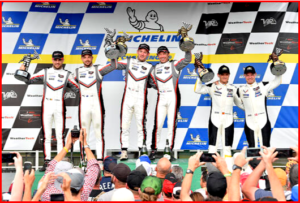 Porsche on way to maker’s title in GTLM.

In Sunday’s two-hour, 40-minute Michelin GT Challenge at Virginia International Raceway the GT Le Mans (GTLM) class finishing order had teammates finishing together led by the Porsche GT Team which scored a 1-2 sweep on the 3.27-mile, 17-turn circuit. No. 911 Porsche 911 RSR driver Nick Tandy led his teammates, Earl Bamber in the No. 912 Porsche across the line by 0.737 seconds to score the third victory of the season for himself and his co-driver, Patrick Pilet. They were followed in  third by the  No. 3 Corvette Racing co-drivers Jan Magnussen and Antonio Garcia, who now have finished on the podium in four consecutive races at VIR dating back to their first of two consecutive wins starting in 2016.

The victory likely clinched the 2019 WeatherTech Championship GTLM manufacturer’s title for Porsche, which only needs to earn the minimum points for starting the final two races of the season to win it. It was the sixth victory of the season for the Porsche GT Team and was the second VIR victory for Tandy and Pilet, who won here in 2015. The two Porsches dominated most of the race, combining to lead 86 of the 88 laps completed in the race.

Fourth place went to the other Chevrolet Corvette C7.R, the No. 4 co-driven by Tommy Milner and Oliver Gavin. Ford Chip Ganassi Racing occupied the next two positions. Westbrook and co-driver Ryan Briscoe saw their winning streak snapped at two straight races with a fifth-place ride in the No. 67, ahead of teammates Dirk Mueller and Joey Hand, who took sixth in the No. 66 Ford GT.

In GTD, Jeroen Bleekemolen and Ben Keating of Mercedes-AMG Team Riley Motorsports in a Mercedes-AMG GT3 won. Second went to Mario Farnbacher and Trent Hindman of Meyer Shank Racing in an Acura NSX GT3. Third went to Toni Vilander and Cooper MacNeil of Scuderia Corsa in a Ferrari 488 GT3.

Next for the WeatherTech Championship is the penultimate round of the season at WeatherTech Raceway Laguna Seca on Sunday 15 September. The two-hour, 40-minute race with all four classes will be televised live on the NBC network beginning at 3 p.m. ET.