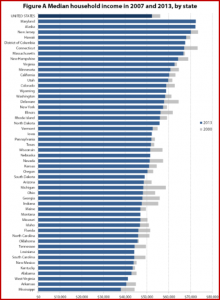 The economy remains stuck in park.

Income levels and poverty rates are stuck in park in most states during the 2012 to 2013 years, according to the U.S. Census Bureau’s American Community Survey, which is billed as the nation’s most comprehensive data source on American households.

“The increases in poverty in New Jersey and New Mexico are the most troubling, although the lack of any significant decrease in most other states is also deeply frustrating,” said David Copper of EPI. “North Dakota is the only state where the poverty rate has fallen back down to pre-recession levels. In every other state nationwide, poverty rates remain significantly above their 2007 levels.”

“The failure to see any significant reduction in poverty over the last several years is a direct consequence of the continued weakness in the labor market. (It’s not surprising that poverty has fallen in North Dakota given that the state’s unemployment rate has averaged 3.3% from the start of the recession to today.) At the same time, however, policymakers have directly stymied poverty reduction by cutting back on unemployment insurance. If we want to start bringing poverty rates down, we need to restore the labor market back to full health, lift wages, and start sharing economic growth more broadly,” said Cooper.

Ken Zino is an auto industry veteran with global experience in print, broadcast and electronic media. He has auto testing, marketing, public relations and communications expertise garnered while working in Asia, Europe and the U.S.
View all posts by Ken Zino →
This entry was posted in economy and tagged American Community Survey, autoinformed, autoinformed.com, census bureau, epi, Ken Zino. Bookmark the permalink.