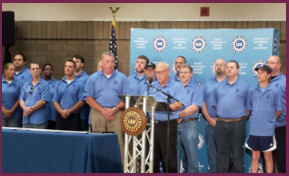 “This is not only in violation of US law, but also violates the ‘Declaration on Social Rights and Industrial Relationships at Volkswagen’ signed in June 2002.”

IndustriALL Global Union is calling on German car manufacturer Volkswagen to immediately enter bargaining negotiation with workers at the VW plant in Chattanooga, Tennessee represented by the UAW (workers interviews click here). Three years ago, on 4 December 2015, 70% of the skilled workers at the Volkswagen plant in Chattanooga voted to be represented by the UAW.

However, instead of entering into bargaining with the union, Volkswagen has repeatedly taken legal action against the vote, including an appeal against the ruling of the National Labor Relations Board during August 2016, which ruled in favor of the UAW.

“This is not only in violation of US law, but also violates the ‘Declaration on Social Rights and Industrial Relationships at Volkswagen’ signed in June 2002.”

If not, IndustriALL Global Union sees no other option than suspending the Global Framework Agreement (GFA) with Volkswagen (“Declaration on Social Rights and Industrial Relationships at Volkswagen”), as the strongest sign of disagreement available.

Working relationships with Volkswagen are valuable and have proven to be effective and beneficial for millions of workers working directly or indirectly for Volkswagen worldwide.

In a resolution passed by the Global Group Works Council of Volkswagen last week on 6 December, the elected Volkswagen trade unionists from all over the world supported the demand for an immediate recognition of the skilled workers in Chattanooga.

“We protest against the fact that Volkswagen has still not accepted the election of the maintenance workers and has not complied with related bargaining rights and thereby tries to use the anti-union legal environment in the USA to avoid entering into collective bargaining.”

With further examples of workers’ and trade union rights at stake at other manufacturing plants in southern USA, IndustriALL says it will continue to monitor other multinationals present in the region and coordinate appropriate action to guarantee respect for workers’ rights.