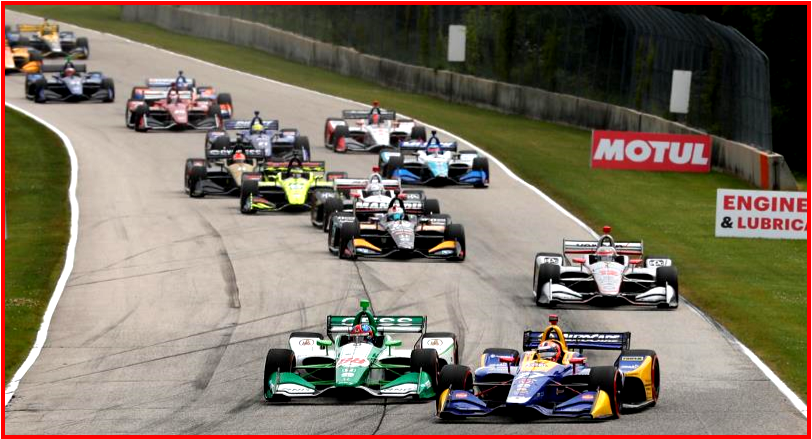 Driving the #27 Andretti Autosport Honda (right), Alexander Rossi sweeps across the front of pole qualifier and fellow Honda driver Colton Herta to take the lead during the first lap at Road America.

Alexander Rossi drove to an unimpeded victory in the REV Group Grand Prix as the Andretti Autosport driver led every lap but one Sunday on Road America’s high-speed circuit. Rossi with Honda power won by 28.4391 seconds over Will Power’s Chevy. There were only two passes for the lead during the snooze fest.

This gave Rossi a second victory in the 2019 NTT IndyCar Series, and the seventh of his four-year career. In what was a yawner of a race, it closed the 27-year-old Californian within seven points of the championship lead with seven races remaining.

Starting second, Rossi passed pole sitter Colton Herta on the first of 55 laps around the 14-turn, 4.014-mile permanent road course and was never headed. The only lap Rossi didn’t lead came on the last of his three pit stops in the caution-free race. He returned to the top of the leaderboard when Graham Rahal made his last stop a lap later.

Rahal spent the second half of the race in a multi-car fight over the third place. While Will Power ran a relatively uncontested second for the final 20 laps, Rahal battled championship leader Josef Newgarden and fellow Honda drivers Herta, James Hinchcliffe, Scott Dixon and Felix Rosenqvist for the final podium spot. With Herta on a different tire strategy throughout the race, the order shuffled several times in the closing laps before Newgarden held on to third by 1.5 seconds over Rahal.

Will Power had his best finish of the 2019 IndyCar season.

Power started third in the No. 12 Verizon Team Penske Chevrolet, moved up a position through the first round of pit stops and remained there to log his best finish of the 2019 season. Newgarden, in the No. 2 REV Group Team Penske Chevrolet, followed a similar path to his teammate – starting fourth, advancing to third on the first round of stops and holding steady the rest of the race.

Rossi has five finishes of first or second place in the past seven races, beginning with a victory at the Acura Grand Prix of Long Beach in April. He’s as close to the championship lead now as he has been all season. Team Penske’s Josef Newgarden, who finished third Sunday, has 402 points to Rossi’s 395. 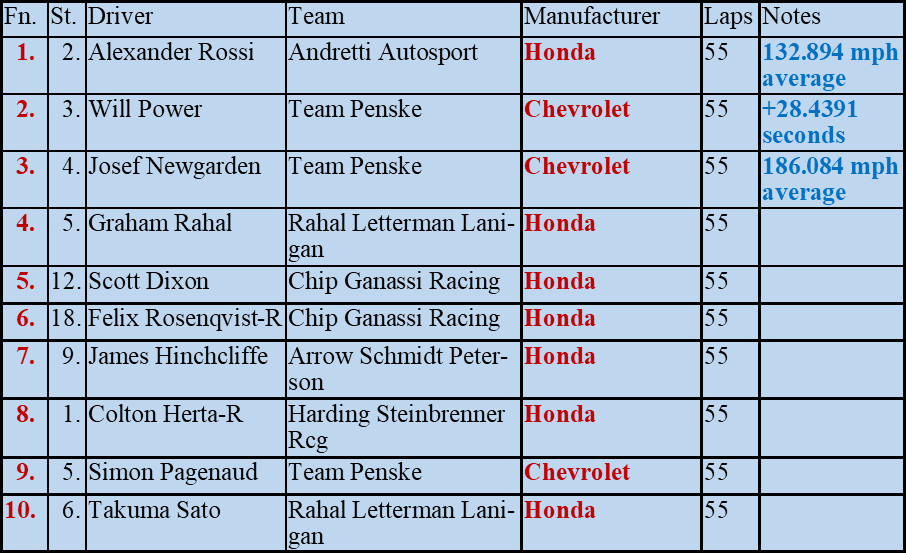 The next NTT IndyCar Series race is the Honda Indy Toronto on the streets of Exhibition Place. The race airs live at 3 p.m. ET Sunday, July 14 on NBCSN and the Advance Auto Parts INDYCAR Radio Network.