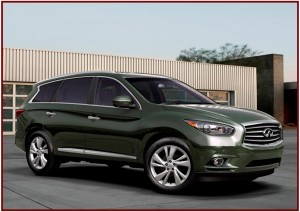 The unending "quest" to call a seven passenger vehicle anything but a minivan.

The Infiniti JX Concept, a preview of a 7-passenger, 3-row luxury crossover, made its world debut today at the Pebble Beach Concours d’Elegance. The JX Concept was unveiled by Senior Vice President and Chief Creative Officer Shiro Nakamura prior to its display throughout the weekend’s activities at the Lodge at Pebble Beach.

The Infiniti JX will offer what’s said to be a balance of driving exhilaration and fuel efficiency through a combination of a V6 engine and all-wheel or front-wheel drive. The Infiniti JX will also be the first Infiniti to have a fuel-efficient continuously variable transmission. The CVT will mimic a shifting automatic transmission, though, when the Sport mode is engaged.

Previous attempts to use CVTs with V6 engines have failed – so this appears to be a daring move on Infiniti’s part prompted no doubt by impending fuel economy regulations. This potentially sets up a Lexus – clearly the luxury hybrid leader with more applications coming – versus Infiniti, which eschews hybrids in favor of parent company Nissan’s CVT technology.

The production version of the seven passenger sport utility will debut, at the Los Angeles Auto Show this November and go on sale in the spring of 2012 as a 2013 model.

“The three-row luxury crossover segment is one of the fastest growing among all luxury vehicle segments, providing a huge opportunity for Infiniti,” explained Infiniti Americas Vice President Ben Poore.

The production Infiniti JX will offer what is expected to be class-leading roominess, along with a 2nd row seat design that tilts and slides forward 3rd row access – just like, well, a minivan.

“With the JX, you will even be able to leave a child seat latched to the 2nd row while getting in or out of the 3rd row – just one example of the vehicle’s inspired flexibility and versatility,” said Poore. Well, just like the Honda Odyssey minivan.

The Infiniti JX has the currently available Blind Spot Intervention. A new gadget, Backup Collision Intervention, detect crossing objects behind the vehicle and, if necessary, the system will automatically engage the brakes to help avoid a collision.