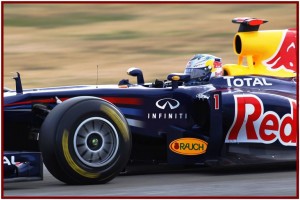 BMW, Honda, Toyota, and Bridgestone among others have all fled from F1 because of its costs and irrelevance to the business of selling cars. Renault and Nissan obviously disagree.

Not only politics but racing too makes strange bedfellows. Infiniti, a Japanese luxury brand – infamous for its “rocks and trees” advertising campaign that introduced it in the U.S. – announced today that it will go F1 racing with Red Bull Racing Renault for the 2011 and 2012 F1 seasons.

Renault, of course, owns a 44.3% stake in Nissan, while Nissan holds 15% of Renault shares. Each company has a direct interest in the results of the other.

Renault facing heavy losses in 2009 sold its stake in its F1 team but continued to supply engines through its subsidiary in Viry-Châtillon to Red Bull Racing. Formula One teams can easily consume more than $500 million to operate for a single season, but impending – and controversial – rule changes will attempt to address that.

At roughly the same time as loss-making Renault was fleeing the F1 spectacle Honda and Toyota dumped their F1 teams because of their heavy operating losses and what was said with justification to be the irrelevance of F1 circus to the business of making and selling automobiles.

Nonetheless, Renault’s presence continued after 35 years of competition in what boosters still maintain is the preeminent motor racing series even in the face of cheating as well as financial and sex scandals that rival the antics of Hollywood personalities and the imaginations their script writers.

With the new F1 deal the Renault Nissan relationship gets murkier. As part of the agreement, Infiniti will have logos on the racing cars, driver’s clothing and related team uniforms and equipment.  However, the Red Bull Racing team will continue to use the Renault F1 engines in 2011 and 2012.

“Over the mid-term, Infiniti will be simultaneously expanding its global presence and broadening its product range, said Andy Palmer, Senior Vice President, Infiniti” in a statement. “Given these twin ambitions, it is clear that Formula One offers us an unrivalled global communications platform, complementing Infiniti’s ethos of Inspired Performance.”