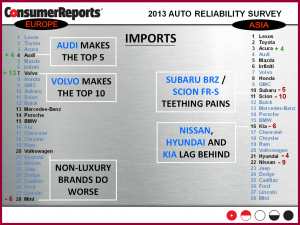 The 2013 Annual Auto Reliability rankings revealed today before the Automotive Press Association in Detroit shows that General Motors and the Chrysler Group have barely average reliability, while Ford Motor continues to do poorly. The largest U.S. reliability study just publicly released by Consumer Reports shows that infotainment system continue to have high failure– as many as 15% don’t work properly. Moreover, unlike infant mortality in in other consumer electronics there are growing failure rates with age. 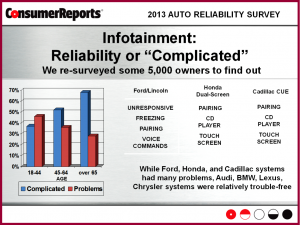 It could be that older buyers are not using all the features and don’t know if they work properly.

The audio, navigation, communication, and connected systems in newer cars, aside from enabling deadly distracted driving, are now clearly a major source of owner discontent. In-car electronics generated more complaints from owners of 2013 models than for any of the other 16 categories. In many cases, the survey revealed touch-screen infotainment systems have been buggy, with frustrating screen freezes, touch-control lag, or a reluctance to recognize a cell phone, an MP3 device, or a voice command. The problems go far beyond complicated systems that younger buyers demand, and older buyers often dislike.

CR uses the survey data to compile reliability histories on vehicles and then predict how well new cars that are currently on sale will hold up. Such Consumer Reports recommendations heavily influence the purchase of new vehicles, with some claiming that more than 50% of new car buyers consult them. While its importance is possibly overstated, Toyota Camry, Rav4, Toyota Prius V and the Audi A4 are being removed from the recommended list – among other vehicles – not for reliability problems, but for poor performance in a new IIHS offset crash test, CR told APA. (IIHS Slams Luxury Cars over Frontal Crash Protection Results)

Based on data from the owners of 1.1 million vehicles, CR predicts that the redesigned 2014 Subaru Forester SUV will be the most reliable vehicle. The Ford C-Max Energi plug-in hybrid got the worst score, and the C-Max Hybrid was barely better.

Two best-selling models, the redesigned 2013 Honda Accord V6 and the 2013 Nissan Altima, scored too poorly in the survey for Consumer Reports to continue “Recommending” them. Last year, CR predicted that both vehicles would have at least average reliability.

General Motors did the best among the Detroit Three – if average reliability is an acceptable showing. In addition to GMC, Buick climbed nine slots to 12th place compared to last year. All Buicks except the V6 LaCrosse were average or better. The only dark spots for Chevrolet are the Camaro and Cruze, both of which earned below-average reliability scores. Cadillac was a mixed bag with the XTS doing poorly and the ATS doing well.

Chrysler is still average overall, but it has 18% more problems overall than the median in the survey. The Fiat 500 is much worse than average. The Chrysler 300C now scores above average – last year it was the company’s most troublesome vehicle. Some of Chrysler’s most reliable models, such as the Jeep Compass and Patriot SUVs, don’t score well in Consumer Reports’ testing, while the better performing 2014 V6 Jeep Grand Cherokee has now fallen to well below average reliability.

Of the 31 Ford models, only one, the F-150 pickup with the 3.7-liter V6, was above average. Seven were average. CR said the Ford’s gaffs do not end with the historically problematic My-Touch systems. Several EcoBoost turbocharged V6 models have poor reliability as well. Almost two-thirds of the 34 Fords and Lincolns in the CR survey got scores that were much worse than average.

This survey is only one data point among many available to new car shoppers, and model rankings as opposed to brand rankings are more helpful. Complete reliability report and results for all models are available at www.ConsumerReports.org today, and in the December issue of Consumer Reports, on newsstands November 5.