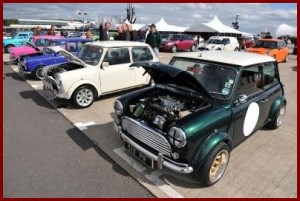 The sun never sets on the, er, German auto empire.

What’s said to be the world’s largest gathering of classic Mini enthusiasts opened today in Hungary at the resort of Balatonfüred. This 36th edition of what is now a traditional will run from 24 to 28 May. It is estimated by BMW, now the owner of the fabled British brand, that 4,000 fans, including representatives from more than 200 Mini Clubs in countless countries will appear on the northern shore of Lake Balaton.

Wedding bells will also be ringing as two members of the host Mini Club take their vows at the event arena before starting their new life together at the wheel of a classic Mini – followed by a celebratory convoy of some 200 other examples of this British classic, whose drivers have registered in advance for the occasion.