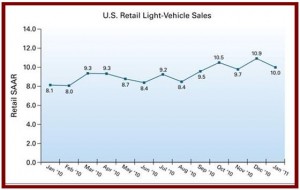 January retail volume is expected to be up 23% from one year ago. Retail transactions are the most accurate measurement of true underlying consumer demand for new vehicles, according to J.D. Power and Associates, which gathers transaction data from more than 8,900 retail franchisees throughout the United States.

While mildly encouraging news for automakers, it isn’t necessarily good news for consumers as better inventory control and rising demand will push prices much higher than they have been for the past two year.

However, the projected January selling rate reflects a decline from a stronger December. Whether this is a normal seasonal fluctuation remains to be seen. Power thinks so.

“For three of the past four months, sales have been above a 10-million-unit SAAR, and buyers have returned to showrooms without the crutch of high incentives. This signals stability and strength of natural demand,” said Jeff Schuster, executive director of global forecasting at J.D. Power and Associates.

Total light-vehicle sales for January are expected to come in at 794,500 units, which is 14 percent higher than January 2010. Fleet sales are projected to account for 20% of total sales, with volume at 160,000 units. At the Detroit Three, fleet sales have been running at about 30% recently.

The auto industry might face the opposite problem of bloated inventories later this year if sales continue to increase. Scaled back suppliers are already having trouble keeping up with increased production.

“Optimism is increasing for the auto industry following a stronger outlook for the economy,” said Schuster. “GDP growth is expected to be in the 3-3.2% range for 2011. As the macro drivers continue to improve and credit availability increases, further upside potential remains.”