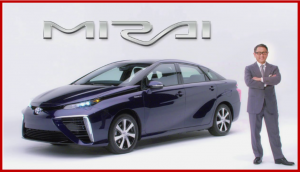 About 60% of the initial Mirai orders are from government offices and corporate fleets, and 40% from individual consumers.

Toyota Motor Corporation, Nissan Motor Co. and Honda Motor Co. have agreed to work together to accelerate the development of the hydrogen station infrastructure for fuel cell vehicles (FCVs) the Japanese automakers said today in Japan.

Specific measures to be undertaken by the Big Three Japanese manufacturers were not announced. However, this appears to be an attempt by the automakers to prod the Japanese government into faster action on build hydrogen refueling stations.

During the first month since its launch in Japan on 15 December 2014, 1500 orders have been received for Toyota’s Mirai fuel cell sedan that lists for ¥7.24 million, or ~$63,000. Japanese governments will subsidize Mirai by about ¥3 million.

The Toyota strategy is to repeat the Prius hybrid success – more than 5 million sold globally since the late 1990s – whose sales were initially and to this day subsidized in Japan and the U.S. In the U.S., state and federal subsidies will total $12,500 when the Toyota Mirai fuel cell vehicle goes on sale later this year in California.  It will list for $57,500, and have a $499 a month lease.

Toyota has recently announced a new plan to increase from the production of  700 FCVs this year to approximately 2,000 in 2016 and around 3,000 in 2017. The problem is how to fuel the hydrogen powered cars. Toyota decided the supply structure should be adjusted to reflect the level of demand for the vehicle, because of the 1,500 orders received in the first month of sales in Japan and the prospect of the model being launched in Europe and the U.S. later this year. TMC can build the FCVs, but thus far not the refueling stations.

“Fuel cell vehicles are seen as the long-term future for the auto industry but cost of development is prohibitively expensive and seen as only surviving the short term with subsidies,” said Art Wheaton, automotive expert and senior lecturer at Cornell University’s ILR School.

According to conventional wisdom, hydrogen-fueled FCVs will only be saleable in large numbers if a hydrogen station infrastructure is developed. While there is some work in this area, there remain large difficulties in installing and operating hydrogen stations while FCVs are not common on the road.

The Japanese government noted the importance of developing hydrogen station infrastructure as quickly as possible in its Strategic Road Map for Hydrogen and Fuel Cells published in June 2014. The government is supporting the installation of hydrogen stations with subsidies, and has also said it will introduce a range of additional policies aimed at promoting new demand for FCVs, including partially subsidizing the cost of operating hydrogen stations. Such policies have not been forthcoming.

The Japanese Big Three said they will “give careful consideration to concrete initiatives, such as underwriting a portion of the expenses involved in the operation of hydrogen stations.”

Ken Zino is an auto industry veteran with global experience in print, broadcast and electronic media. He has auto testing, marketing, public relations and communications expertise garnered while working in Asia, Europe and the U.S.
View all posts by Ken Zino →
This entry was posted in alternative fuels and tagged autoinformed, autoinformed.com, fcvs, hydrogen, Ken Zino. Bookmark the permalink.