Japanese Big 3 – Toyota, Honda, Nissan – Sales Up in May 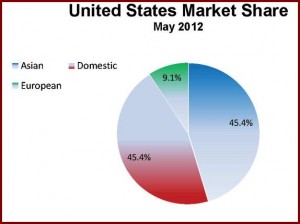 Asian automakers stayed even in share when compared to April.

The Japanese Big Three – Toyota, Honda and Nissan – reported strong U.S. auto sales during May, even though the large percentage increases that headlined releases are misleading because of last year’s earthquake and tsunami, which disrupted vehicle production and allowed for boasts of 87% gains and the like – some of them printed by the naive. When all the numbers were in, the Japanese held ground but didn’t pick up any.

In spite of the hyperbole, Toyota Motor came close to displacing Ford Motor from its assumed Number 2 spot in the U.S. by posting monthly sales of 202,973 – within a rounding error of Ford’s 215,699 and firmly putting Toyota in the Number 3 sales spot for the year-to-date. The other Japanese powerhouse members were also back in shape. American Honda posted sales of 134,000 (576,000 ytd) easily ahead of the Nissan at 92,000 (485,000 ytd). With a new Accord and Altima due this fall, the family car market is about to becomes more competitive than it has been in years, which is good for buyers but might leave weaker and older entries as road kill. An interesting footnote here is the Lexus GS with 2,000 sales – more than 9,000 ytd – as the strongest Japanese performance car to ever take on BMW and Mercedes and their entrenched buyers.

Companies treading water once again included capacity constrained Hyundai at 67,000 units, a sales rate about half the growth for the month and the year (293,000 ytd), which was nevertheless good enough to keep it in the Top Ten at Number Seven. The other Korean maker Kia at 52,000 in May or +7% garnered eighth place (237,000 ytd or +19%).

Mostly unnoticed Mazda grew with the market at more than 20,000 units, and year-to-date, the economically challenged Hiroshima-based company is up 20% at 124,000 units. The new CX-5 is showing great promise as a vehicle, and Mazda has finally backed up its line of technically competent vehicles with a full-fledged advertising campaign centered on the new crossover. Not only will this pay sales dividends going forward, but also if an umbrella campaign appears for the badly named but extremely fuel and cost efficient “Skyactiv” technologies, then Mazda could bolt from the pack later this year, maybe not Kentucky Derby style as in I’ll Have Another, but enough for its sales to outpace the market.