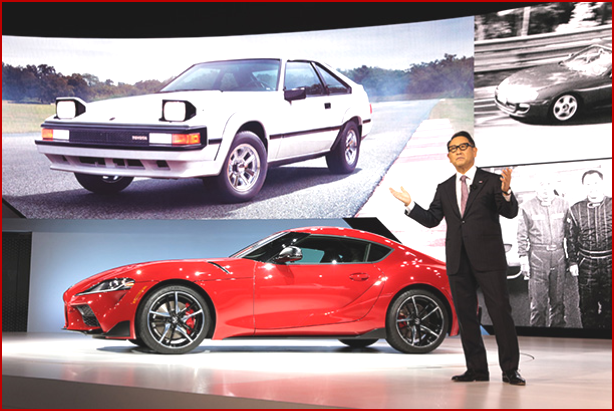 The fifth-generation GR Supra, the first global Toyota GAZOO Racing model, made its undisguised world debut at the North American International Auto Show in Detroit today. The 2020 Supra goes on sale in summer of 2019 and will be available in two grades – 3.0 and 3.0 Premium. There will also be a profit improving Launch Edition based on the 3.0 Premium grade. The rear-wheel drive design that honors Toyota sports car heritage with its low center of gravity and optimal weight balance. There is a link to Toyota’s 1967 2000 GT and 1993-2002 Supra in both design and configuration.

The 2020 model Supra claims to be a forward-looking sports car, brimming with advanced powertrain, chassis and multimedia technology. The 2020 model will be powered by a turbocharged inline six-cylinder engine. The new Supra’s 3.0-liter twin-scroll turbo six will produce 335 hp and 365 lb-ft of torque and mated with a quick-shifting 8-speed automatic transmission with paddle shifters. Toyota President Akio Toyoda tested the Supra on the Nürburgring and other racing venues to give his personal feedback, but Toyota didn’t reveal his lap times. 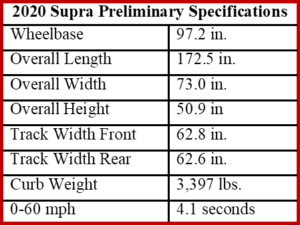 Toyota GAZOO Racing in Japan, with input from Toyota Motor North America and Toyota Motor Europe, attempted to give the Supra its own driving characteristics. The claim is – without our road testing – the 2020 Supra will reward drivers of all skill levels with a thrilling sports car feel, even in everyday driving.

The 2020 Supra has a 3.0-liter turbocharged inline six-cylinder that will produce 335 hp and 365 lb-ft of torque. The torque comes on starting at  low engine speeds from a combination of a twin-scroll turbocharger, direct fuel injection and continuously variable timing on both the intake and exhaust camshafts. Engine response is enhanced due to the inline six’s variable intake valve lift system that adjusts intake valve timing and duration.

The 8-speed automatic transmission delivers quick up- and downshifts with paddle shifters for manual control when desired. Short ratios for the lower gears and a Launch Control function enable powerful acceleration with maximum traction. Toyota projects 0-60 mph acceleration in 4.1 seconds, making this the quickest Toyota-branded production vehicle to date. Top track speed will be electronically limited to 155 mph.

The multi-link rear suspension with a five-arm construction consists of lightweight aluminum to reduce weight while steel is employed in key areas for added strength and durability. The rigid rear sub-frame, and the bracing that connects it to the body structure, helps ensure extremely precise wheel control.

Supra will come standard with 19-inch forged alloy wheels. The rear wheels and tires are wider than on the front (rear tires: 275/35R19; front tires: 255/35R19) to enhance grip, and performance Michelin Pilot Super Sport tires are fitted. Brakes are large at all four corners, highlighted by 13.7-in. front rotors held by 4-piston Brembo calipers.

Standard is Adaptive Variable Suspension that adjusts damping force in response to driver input and road conditions. Two settings for the suspension are available – Normal and Sport. Supra will have an active differential that uses an electric motor and multi-plate clutches to control lateral torque. The active differential precisely controls torque distribution between the rear wheels, with stepless variable locking from 0-100%. The differential can control torque distribution between the rear wheels when cornering under both acceleration and braking, enabling greater momentum through a corner. The active differential is also effective at ensuring neutral handling by reducing both understeer and oversteer.

Road and track (not by my old ROAD AND TRACK alma mater) development took place in France, Austria, winding roads through the Alps, Germany (including the Nürburgring), Sweden (ice and snow road testing), the U.K., Japan, Australia, and the U.S. The new Supra will be assembled at Magna Steyr in Graz, Austria.