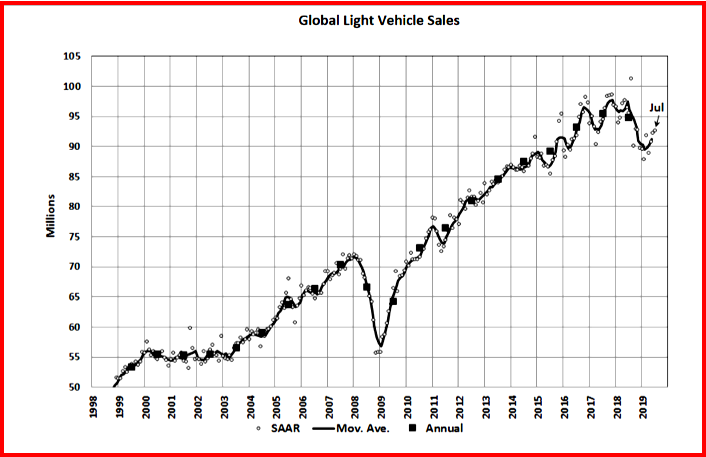 Everywhere you look the economy is fragile and likely headed for a recession.

July global light vehicle (LV) sales fell 1.5% in year-on-year (YoY) terms in July, but the selling rate rose to 92.5 mn units/year, from 92.1 mn units/year in June, according to consultancy LMC.

Sales performance was mixed, with good results in some regions counterbalanced by weakness elsewhere. There was YoY growth in the USA, Western Europe, Japan and South America, but the US selling rate was lower than in June, while Western Europe was propped up by Germany.

With an extra selling day, July’s US LV sales were up by 2.2% YoY, only the second positive result of the year. However, selling day adjusted, sales were down by -1.6% YoY. The 1.4 mn LVs sold last month translate into a seasonally adjusted rate of 16.9 mn units/year, the same as a year ago. Unlike other months, July retail sales were up, growing by 4.1% to 1.2 mn units. Fleet sales, which fell by 6.6%, represented 14.1% of sales, down by more than 1 percentage point from last year.

Canadian sales have declined YoY for nine straight months. In July, they fell by 1.1% YoY, while the 174k LVs sold indicate a selling rate of 2.02 mn units/year, only the second time in 2019 that the rate has risen above 2 mn units/year. In Mexico, the negative trend remains. July sales totaled 107k units, down by -6.1% YoY. The selling rate increased by 24k units/year from June, to 1.33 mn units/year.

Western European LV sales grew by 1.3% YoY in July, helped by extra selling days in a number of markets. Nevertheless, the seasonally (and selling day)-adjusted selling rate accelerated to 16.4 mn units/year, from 16.2 mn units/year in June, indicating that the market did seem to gain some momentum in July.

Year-ago comparisons are troubled by a high base effect, a problem which will be exacerbated in August, as sales were pulled forward last year ahead of the WLTP implementation in September 2018. Germany continues to be the powerhouse of Western European registrations, thriving among a generally stagnant region. The German car selling rate soared to 3.8 mn units/year; while Spain‘s car registrations fell -11.1% YoY in July, and the UK market continues to be soft in the midst of Brexit uncertainty.

Russian new LV sales came in below expectations in July. Just under 140k units were sold last month, representing a drop of -2.4% YoY. The LV selling rate fell to 1.5 mn units/year in July, from 1.8 mn units/year in June. The extent of the downward slide in the selling rate was unexpected given that the authorities launched a fresh round of incentives on July 1st. However, domestic demand continues to be held back by the lack of real income growth, the weakness of the ruble and high interest rates.

“The improvement in (China) wholesales in June and July can be attributed to aggressive destocking at dealerships over the past year, and the easing of restrictions on vehicle purchases at a local level. However, it is probably premature to declare a recovery in the market. It is likely that sales will continue to be disrupted by the renewed escalation in the US-China trade war, the implementation of the State VI emission standard, and tighter regulations on overloading for Light and Mini Trucks,” says LMC.

Ahead of the consumption tax hike on 1 October, sales in Japan picked up lightly. The July selling rate of 5.2 mn units/year was nearly 5% higher than June’s, but that was lower than the average selling rate of 5.3 mn units/year in H1 2019. On a YoY basis, sales grew by 4% in July. Consumers appear to be choosing to save before the tax hike, instead of spending, amid global uncertainty.

Sales in South Korea continued to decelerate. The July selling rate of 1.66 mn units/year was little changed from June. On a YoY basis, sales fell by -4.2% in July, the sixth consecutive month of decline, along with weakening consumer confidence. While GDP growth picked up in Q2, thanks to increased government spending, it could slow again in H2 2019, due to the intensifying South Korea-Japan trade dispute.

Despite high unemployment and a struggling economy, LV sales in Brazil totaled 232k units in July, up by 11% YoY. This indicates an annual selling rate of 2.61 mn units/year, down by 80k units/year from June. This result is also lower than the rate average of 2.64 mn units/year in the first half of 2019.

According to preliminary data, Argentinian sales fell by -26% YoY in July, to just under 48k units. Although the selling rate accelerated to 539k units/year, from 425k units/year in June, the market was boosted by a temporary incentive scheme which is due to end in August.