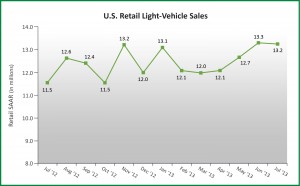 LMC Automotive is raising its forecast for both retail and total light-vehicle sales in 2013.

Total July U.S. sales will be burning hot at 1,336,700 vehicles, if the latest forecast proves true. In the more important retail segment, July is expected to increase by 12% from a year ago to 1,127,100 vehicles. This means a seasonally adjusted annualized rate or retail SAAR of 13.2 million with 1.7 million additional buyers appearing in showrooms than during July of 2012.

Not all this is good news for automakers in general and the Detroit Three. Drastic capacity cuts during the Great Recession have caught them out. Market recovery volumes approaching 16 million are now running at least a year ahead of earlier forecasts. Mandatory overtime and cancelled vacations are the rule of the day, which ultimately will wear down UAW and workers at Japanese companies in North America and inevitably lead to quality declines.

Buyers are also being hit with higher prices and reduced selection. J.D. Power data show that in the first half of 2013, new- and used-vehicle transaction prices have increased 3%. Moreover, there is an increase in longer-term vehicle loans and an increase in leasing, when compared with the same period a year ago.

“The rise in new-vehicle leasing, where the typical lease term is just three years, is providing a counterbalance to the rise in extended-term financing, where a vehicle may be financed for 5 or 6 years,” said Humphrey.

North American light-vehicle production in 2013 is up 4% through June, compared with the same period in 2012. For the high-volume producers, Ford retains the strongest year-over-year increase at 14%, with robust demand continuing for the Fusion. Fiat-Chrysler holds steady in with a 1% increase. General Motors volume is off by 4%, compared with a year ago due to weaker large SUV volume ahead of the upcoming redesign and competitive pressure in the mid-size car segment.

The European brands are tracking consistent with the industry growth, averaging a 4% growth rate from 2012. Despite a slowdown in demand for Hyundai, production growth remains robust at 15% year-to-date, while Toyota is on a 3% growth rate from a year ago.

LMC Automotive’s forecast for 2013 North American production remains at 16 million units, a 4% increase from 2012. Excess capacity is lean across the region, with some manufacturers and vehicle segments in short supply. Capacity utilization is expected to remain above 90% for 2013 and into 2014.

Ken Zino is an auto industry veteran with global experience in print, broadcast and electronic media. He has auto testing, marketing, public relations and communications expertise garnered while working in Asia, Europe and the U.S.
View all posts by Kenneth Zino →
This entry was posted in auto news, news analysis, sales and tagged autoinformed, autoinformed.com, j.d power, Ken Zino, lmc. Bookmark the permalink.