July Unemployment Stagnant at 9.1% as only 117,000 Jobs are Created. Almost 14 Million People are Officially Out of Work 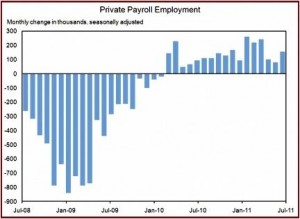 Who says the Great Recession is over?

The number of unemployed persons – 13.9 million – and the unemployment rate 9.1% – changed little in July, the U.S. Bureau of Labor Statistics reported today.

Since April, the unemployment rate has shown no improvement. The labor force, at 153.2 million, was virtually unchanged in July as total nonfarm payroll employment rose by 117,000. Job gains occurred in health care, retail trade, manufacturing, and mining. Government employment continued to decline.

The latest negative economic news came after automakers reported that total U.S. light vehicle market in July grew less than 1% from what was a weak July of 2010 as the economy languishes.

“Bipartisan action is needed to help the private sector and the economy grow,” said Austan Goolsbee, Chairman of the Council of Economic Advisers for the Obama Administration.

The number of persons unemployed for less than 5 weeks declined by 387,000 in July, offsetting an increase in the prior month. The number of long-term unemployed – those jobless for 27 weeks and over – at 6.2 million, changed little over the month and accounted for 44.4% of the unemployed. The longer a person is unemployed, the less likely he will return to the workforce.

The number of persons employed part time for economic reasons (sometimes referred to as involuntary part-time workers) was also unchanged in July at 8.4 million. These individuals were working part time because their hours had been cut back or because they were unable to find a full-time job.

In the cold, bureaucratic language of BLS 2.8 million persons were “marginally attached to the labor force” in July. Also little changed from a year earlier. These individuals were not in the labor force, wanted and were available for work, and had looked for a job sometime in the prior 12 months. They were not counted as unemployed because they had not searched for work in the 4 weeks preceding the survey.

Among the marginally attached, there were 1.1 million discouraged workers in July, about the same as a year earlier. Discouraged workers are persons not currently looking for work because they believe no jobs are available for them. The remaining 1.7 million persons marginally attached to the labor force in July had not searched for work in the 4 weeks preceding the survey for reasons such as school attendance or family responsibilities.

3 Responses to July Unemployment Stagnant at 9.1% as only 117,000 Jobs are Created. Almost 14 Million People are Officially Out of Work