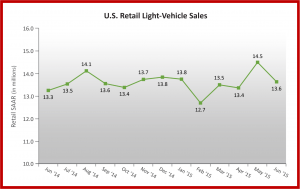 The real party is being hosted by new-vehicle retail sales in June 2015 along with a corresponding SAAR,  a retail seasonally adjusted annualized selling rate, that are expected to reach their highest levels for June since 2005, according to a monthly sales forecast from J.D. Power and LMC Automotive.

“The industry continues to outperform prior-year levels with respect to retail sales and transaction prices,” said John Humphrey, senior vice president of the global automotive practice at J.D. Power. “June is on pace to complete the strongest first half of the year since 2002.” Retail sales through the first half of 2015 are projected to reach 6,771,000.

Ken Zino is an auto industry veteran with global experience in print, broadcast and electronic media. He has auto testing, marketing, public relations and communications expertise garnered while working in Asia, Europe and the U.S.
View all posts by Ken Zino →
This entry was posted in sales and tagged autoinformed, autoinformed.com, j.d power, Ken Zino, lmc. Bookmark the permalink.