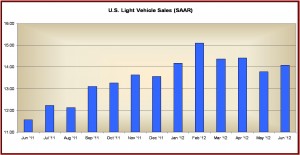 The rest of 2012 will see a fight between incumbent Ford Motor and Toyota Motor for the Number Two U.S. sales spot.

Sales of new cars and light trucks in June increased 22% from the same period a year ago, as the auto industry delivered almost 1.3 million vehicles for the month. On a seasonally adjusted annual basis or SAAR, this meant that the industry-selling rate continues to be more than 14 million units for five of the six months of 2012, resulting in sales of more than 7.2 million vehicles year-to-date.

The slowly recovering auto market presented mixed but arguably positive results for the Detroit Three. General Motors retained its Number One spot in the U.S. with sales of 249,000 vehicles, but the growth year-over-year for GM was only 16%, or, worse,4.3% cytd in a market that is up almost 15%. Still, all four of its brands, Chevrolet, GMC, Cadillac and Buick, posted sales increases during the month reversing slumping sales problems experienced  at Buick and Cadillac this year.

Sales of the Buick Verano were 4,091 in June, and have increased each month since the car launched in December 2011. This is trouble for the more expensive Regal, which sold half that amount, plummeting 34% in June and 33% ytd simply because the Verano offers more room for less money. Chevrolet Sonic sales were 6,785 units and it is now the retail sales leader in its segment. The new small Cadillac XTS began arriving in showrooms in June, and dealers delivered more than 750 vehicles. Later in the year, new larger Cadillac and Buick models are due as is a new pickup truck from Chevy and GMC. Then it will be time to see if GM can finally turn itself around from several decades of market share declines that ultimately forced it into bankruptcy.

Ford Motor also lagged industry growth, posting sales of 207,000 (+7%) in June and 7% ytd. Nevertheless this was strong enough though to keep it in the Number Two sales spot ahead of Toyota Motor Sales at 178,000 vehicles in June or +60%. This is a misleading number because of last year’s earthquake and subsequent production disruptions. Toyota and American Honda (June 125,000 + 49% and 701,000 + 15%) both had strong months and ytd sales because of the resumption of production. This leads me  to the conclusion that their buyer loyalty and quality reputations – deserved or not these days given huge quality issues at both firms – have kept them immune from losing sales to what are the finest generation of small cars from the Detroit Three in history.

Two quarters into 2012, Ford Motor leads Toyota – at 1.14 million versus 1.05 million in total sales. However, the back end of the year is going to be a fight for the Number Two spot, particularly, if Ford stumbles during its changeover of its top selling Escape and Fusion models, as well as the Lincoln MKZ all now underway.

The money and reputation maker at Ford continues to come from the U.S.’s top-selling vehicle for 30 years, the F-Series, which sold 55,025 pickup trucks in June. F-Series remains America’s number one selling vehicle in the first half of 2012 at 301,000, +14%, and Ford is going to need the profits given the collapse of the European market where it looks to lose more than a billion dollars this year.

Chrysler Group continued its sales comeback with U.S. sales up 20% (145,000) with cytd sales at 834,000 increasing 30% compared with the same period in 2011. Catching Toyota or Ford for Number Three during 2012 appears out of the question, but two new volume cars the Dodge Dart compact just shipping and a resurging Fiat 500 – 21,000 ytd and 4,000 in June – are adding sales in segments it has not competed in for years, if ever. Combined with Ram pickup, all of the Jeep line and the segment dominating sales of the Dodge Caravan and Chrysler Town & Country minivans, the group had its best June since 2007, and its 27th-consecutive month of year-over-year sales growth.