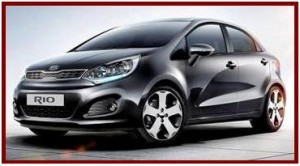 A timely appearance for an inexpensive, fuel efficient subcompact car.

Just in time for $4 a squirt gasoline, the heavily revised 2012 Kia Rio sedan will debut at the New York Auto Show next week. The Rio hatchback will also make its make it first North American appearance.

Both 2012 Rio models are highly sculpted  with accent lines offsetting compound curves in keeping with virtually all new cars appearing these days.

Thus far with sales of about 2,000 units a month in the U.S., the Rio has been an insignificant factor in the hard fought sub-compact sales wars led by Honda Fit, Nissan Versa and Toyota Yaris.

Both Rio models will have more horsepower and increased fuel economy because of a revised four-cylinder gasoline engine that uses direct injection and idle shut off technologies.