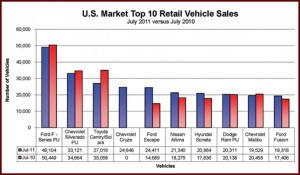 A fierce competitive environment will return with the Japanese in the months ahead.

Hyundai Motor America (HMA) posted sales of 59,561 vehicles in July, a 10% increase compared with the same period a year ago. This is an all-time sales record for both the month of July and the first seven months of the year for Hyundai, breaking records set last year. It’s also the seventh consecutive month that Hyundai has set an all-time monthly sales record.

Kia Motors America (KMA) was at the sales party as well. Kia recorded its best July sales ever of 45,504 vehicles. Led by the U.S.-assembled Sorento crossover, with its record monthly sales of 13,262 units, KMA’s July sales were up 29% compared to the same period last year. KMA has achieved new monthly sales records for 11 consecutive months now.

The Korean strategy targeting only the largest volume segments with well equipped, reasonably priced, spacious and fuel efficient vehicles – backed by what are arguably industry leading warranties – is starting to move them into the U.S. big leagues among traditional automakers. The Hyundai Sonata has been among the top ten best sellers for months now competing with the traditional leaders – Toyota Camry and Honda Accord.

Still, several questions remain about the ability of Korean automakers to continue to grow at the significant rates they have been achieving:
• What happens when the Japanese Three return in force to the market this fall and the new Camry appears;
• The Detroit Three, production short in fuel efficient vehicles at the moment are now also producing competitive small vehicles in increasingly greater numbers;
• Can the Won continue its relatively weak valuation as Korean exports continue to grow worldwide?

The Japanese have already signaled their intent to regain sales and marketshare by increasing incentives recently even though inventories remain thin because of the Japan earthquake. In July incentives on Japanese vehicles were 25% higher compared to June, averaging nearly $2,000 per vehicle, according to Edmunds.com. The Koreans are now averaging less than $1,000, and incentives have been dropping this year as demand for small cars increased and the Japanese were absent from the market. A minor price war could ensue when Japanese production resumes to normal levels this month and next.

U.S. automakers still lead in incentives, of course, averaging more than $2,900 per vehicle, but that’s largely because of their, older less efficient models – which are now being replaced – and what remains for the moment sales mixes dependent on pickup trucks and traditional SUVs. This too will change.

What won’t ultimately change is that a fierce competitive environment will return in the months ahead.