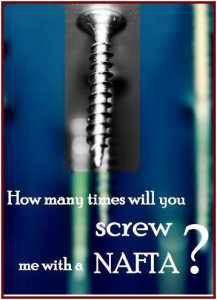 "The metals sector — which makes many items including screws — will be among the sectors taking a deep hit under the Korea trade deal.”

Some of the biggest sales gains in May were posted by Korean automakers Hyundai (up 20.7% versus a year ago) and Kia (up 53.4%). Combined, the two Korean automakers sold more than 100,000 vehicles for the month. Korea is the fifth largest producer and fourth largest exporter of motor vehicles in the world.

However, Korea ranks at the very bottom — 30 out of 30 among the largest automotive markets — for auto market access. The average among major developed economies is 40% market penetration by imported automobiles, but in Korea the total of import vehicles from all global manufacturers in all countries entering the Korean market is around 3.6%. This is only 40,000 vehicles in a market that buys roughly one million vehicles annually.

In an innovative campaign against what it calls a “job killing” deal, Public Citizen today is asking members to send screws to Congress to represent opposition to a pending trade agreement. The symbolic message to Congress about the proposed Korean Free Trade Agreement is simple: “Don’t Screw America” – even if it ignores past performance by lawmakers who critics say with some justification show little interest in creating, let alone protecting U.S. jobs.

Public Citizen said that “President Obama has betrayed his campaign promises and announced he will submit all three of the leftover Bush-negotiated, job-killing NAFTA-style trade deals to Congress this summer. We need to step it up and make an impression in the halls of Congress if we’re to stop this onslaught. It will start with the Korea trade deal — the biggest job-killer of the bunch. The metals sector — which makes many items including screws — will be among the sectors taking a deep hit under the Korea trade deal.”

Other critics – led by AFL-CIO head Richard Trumka – call the Korean FTA a sellout of American workers to global auto industry interests. As such it is an ongoing attack on the dwindling American middle class by international corporations in his view.

Here the labor movement – or what remains of the organized labor – is split. The Detroit Three auto companies – General Motors, Ford and Chrysler – and the UAW have endorsed the Korean FTA. It allows 25,000 cars to be imported annually into the closed Korean market during the next several years – a mere pittance of Korean auto sales here.

Hyundai Motor had all-time record U.S. May sales of 59,214 units, up 21% compared with the same record-breaking period last year. This is the fifth consecutive month that Hyundai has set an all-time monthly sales record.  For the year, total sales are up 29%, with retail volume rising 40%.

Kia Motors America’s growth also continued in May, with the brand posting its best-ever monthly sales of 48,212 units. KMA’s year-to-date sales are up 44.8% over 2010, while the brand’s U.S. market share climbed to an all-time high on the strength of May sales.

The Korean Free Trade Agreement eliminates tariffs on more than 95% of industrial and consumer goods within five years, according to the White House. But it also protects the Korean beef and pharmaceutical industries, and does precious little for auto trade.

“The Agreement will promote the further integration of the U.S. and Korean economies and enhances the competitiveness of U.S. businesses in the world’s 12th largest economy,” President Obama said when the latest version of the Korean FTA – negotiated under President Bush –  was unveiled late last year.