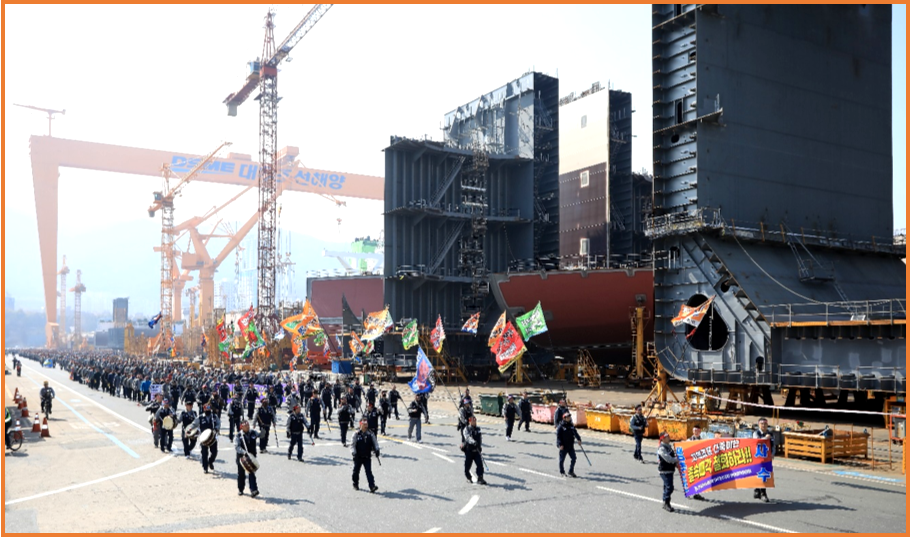 Unions and other stakeholders were excluded from negotiations and think that the merger will spark a crisis in the shipbuilding industry, jeopardizing workers’ livelihoods and local communities.

A memorandum of understanding on the $1.75 billion merger deal was signed on 8 March after secret negotiations between HHI and the state-owned Korea Development Bank, the majority shareholder in Daewoo.

The KMWU has criticized the deal as a Korean government handout to a chaebol run by the family of Chung, Moon Joon. Instead of healthy competition, the deal would give the new company 58.5% of the global liquified natural gas market, 56.6 % of very large crude carriers and 21.2% of all outstanding ship orders worldwide.

The merger will also spin off productive work, as well as HHI debt, to an unlisted company, while retaining the assets in KSOE. The KMWU denounced this as a plan to gouge HHI, shifting the debt into an entity that can be restructured at workers’ expense.

The Korean shipbuilding industry has experienced harsh restructuring, with more than 100,000 workers losing their jobs since 2014. In 2017, during the process of splitting up HHI, the union collective agreement was not recognized, setting a precedent for the further erosion of union influence.