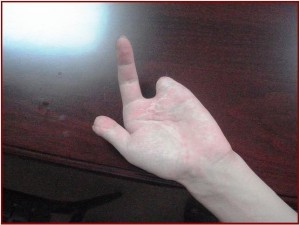 The Institute said it is aware of at least four serious injuries—maimed hands and fingers—over the last several years. Severely injured workers are fired.

The Institute for Global Labor & Human Rights released a new report today that said Ford Motor Company is guilty of worker rights violations at what it terms is a Chinese sweatshop that supplies Ford.

“While millions of democracy advocates are launching protests across the Middle East and North Africa, workers at the Yuwei factory have never heard of a ‘union’ and have no idea what a union is or how it could help them,” said Charles Kernaghan, director of the Institute for Global Labor & Human Rights, a pressure group formerly known as the National Labor Committee.

According to workers cited in the report, 80% of the factory’s production is for Ford. Yuwei has a U.S. office and warehouse in Ann Arbor, Michigan but attempts to contact the company were unsuccessful.

Ford issued the following statement: “We take these allegations seriously and are investigating the situation. Ford has a strong commitment to human rights and workplace safety, and we expect our suppliers to comply with local laws and our Code of Basic Working Conditions. We require all of our suppliers to ensure that our products – no matter where they are made – are manufactured under conditions that demonstrate respect for the people who make them.”

The report says that on 13 March 2009 a 21-year-old, called worker “A,” had three fingers and several knuckles torn from his left hand when it was crushed in a stamping machine. He was making parts for export to Ford.

The report alleges that management deliberately instructed the worker to turn off an infrared safety monitoring system so he could work faster. “We had to turn it off.  My boss did not let me turn it on,” said worker A.  He had to stamp out 3,600 “RT Tubes” a day, one every 12 seconds.

The Institute said it is aware of at least four serious injuries—maimed hands and fingers—over the last several years, and notes that severely injured workers are fired.  New workers receive no training or safety instruction before being assigned to operate dangerous machinery, according to the Institute.

In the case of worker A, he received a total payment of $7,430 for the loss of three fingers, which left his hand severely handicapped. Workers compensation for a similar accident in the U.S. would result in a $144,292 payment.

“Ford,” Kernaghan said,“should not be complicit in the payment of below subsistence wages and the suppression of local and internationally recognized worker rights standards.”