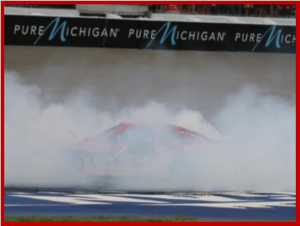 The Chip Ganassi Racing driver won the race  driving the #42 Chevrolet by leading a race-high 41 laps in his 99th career start. With the win, Larson clinches a spot in NASCAR’s playoffs – the Chase for the NASCAR Sprint Cup.

His first win came in 2013 at Rockingham Speedway in the Camping World Truck Series.

He has since won another Camping World Truck race, as well as four Xfinity Series races.

Ken Zino is an auto industry veteran with global experience in print, broadcast and electronic media. He has auto testing, marketing, public relations and communications expertise garnered while working in Asia, Europe and the U.S.
View all posts by Ken Zino →
This entry was posted in racing. Bookmark the permalink.