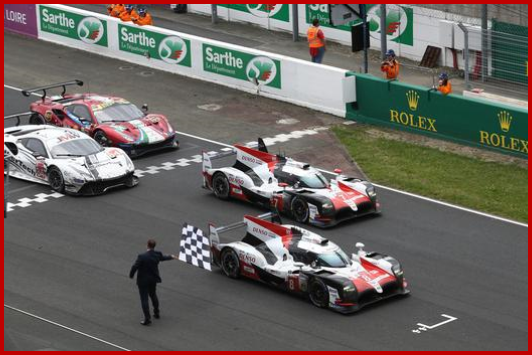 Le Mans this year wasn’t its usual endurance racing riot. Early accidents brought out the safety car, so it split up the racing in the four classes. This meant divided packs, limiting the usual exciting in-class dicing, charging, fender bumping or late braking for position. But fast it ultimately was, no matter how boring some of the long stints were.

Toyota Gazoo Racing claimed a 1-2 result, with Fernando Alonso winning at his debut at one of the world’s most famous endurance races. The Spaniard – who together with Kazuki Nakajima and Sébastien Buemi – drove hard throughout the 24 hours in this second round of the FIA WEC Super Season.

Nakajima was behind the wheel of the No. 8 Toyota TS050 Hybrid as it took the chequered flag two laps ahead of the No.7 entry driven by Kamui Kobayashi, Mike Conway and José Maria Lopez. The two Toyotas had been running closely together through much of the 24 hours, but late-race drama – missing a pit-in and almost running out of fuel, as well as penalties saw No.7 drop behind in the final hours. Toyota was a gallon of fuel away from another embarrassing failure.

The LMP1 non-hybrids – hastily drafted this year from P2 – were unable to match the Toyotas. It was a bastardized group from a forced rule change because of the withdrawal of dirty-diesel scandalized Audi last year from the more expensive P1 class – leaving Toyota as the only competitive hybrid entry. And thereby assuring the outcome as Toyota was racing against itself.

Virtually all the fastest non-hybrid new cars had technical problems during the race, but Rebellion Racing’s Mathias Beche, Thomas Laurent and Gustavo Menezes took the final podium place and the No.1 driving team came home in fourth, both with an Oreca chassis and Gibson engine. It was Laurent’s second podium finish in a row, with Le Mans treating the home-country young Frenchman with the respect and enthusiasm the French have for a Michelin five-star restaurant. The No.5 CEFC TRSM Racing Ginetta G60-LT P1 Mecachrome was the only other classified LMP1 car. How sad, an endurance race where business reasons emptied the grid before the green flag waved.

So, it’s not surprising that the business and politics of racing are now at the wheel with the Automobile Club de l’Ouest (ACO) and the Federation Internationale de Automobile (FIA) announcing on the eve of Le Mans yet another rules change to alter the class – if a handful of cars can be defined as such.

The unnamed new top class is ill-defined but self-evidently needed to assure sports car racing remains a sport rather than turn into NASCAR-style pro-wrestling where decals allegedly make the difference on a common spec car. One-quarter the cost of fielding a current two-car team is promised. Hybrid propulsion will be mandatory.

If anyone thinks that racing in its top classes can be inexpensive, I have a bridge to sell you in Brooklyn; one where I used to test cars for harmonic induced noise. Much noise vibrating around racing circles these days.

On this side of the Atlantic, IMSA’s response shows that wrangling over the new rules is just on the formation lap: “This is a work in progress. And while a lot of progress has been made there is much still to be done. We look forward to continuing to work closely in the coming months, collaborating with the ACO and FIA and our existing prototype partners, to confirm a viable cost structure for competing in the Prototype class. IMSA continues to be focused on providing attractive opportunities for manufacturers and teams to compete in the IMSA WeatherTech Sports Car Championship.”

Ah yes — self promotion and taunting from the ‘Merican, NASCAR-owned sanctioning body that is the only show running here in professional sports car racing except for the SCCA, which continues to  nurture club racing in the U.S.

It will be great fun to watch the British, French, Germans, Italians and Americans wrangle the rules in search of an unfair advantage – unless you’re a sponsor with tens of millions or more on the grid  in whatever mound of currency you count it in. All I hope for is real racing among more or less equal equipment where drivers, strategy and weather play in the outcome.

This lack of competition in P1 was underlined by SMP Racing showing early pace with the two BR Engineering BR1-AERs. Alas it failed to get either of its two cars to the finish, with an overstressed engine blowup forcing Jenson Button out of the race with less than one hour to go. P2 engines are now match for  hybrid cars that have both internal combustion and electrons providing, oh, 1000 horses of motive power.

Following wins at Spa (WEC) and Monza (ELMS), the No.26 G-Drive Racing ORECA 07 Gibson took a dominant LMP2 class victory. Jean-Eric Vergne, Roman Rusinov and Andrea Pizzitola were all first-time winners of the French endurance classic and the TDS-run car had a flawless run to the flag after the opening hour.

Frenchman Vergne not surprisingly took the car over the finish line to record victory two laps ahead of the No.36 Signatech Alpine Matmut entry of Nicolas Lapierre, Andre Negrão and Pierre Thiriet.  As well as being a first Le Mans class win for the drivers, it was also the first for G-Drive and the TDS team.

Fourth on track and third in the WEC points classification, due to podium finisher Graff SO24 not being a WEC entrant, was the TDS Racing entry of Francois Perrodo, Matthieu Vaxivière and Loïc Duval which made a late charge for the podium place.

The Le Mans was started by Rafael Nadal in front of a host of stars and celebrities, attracted a 256,900-strong crowd, according to the self-interested promoter. The next round of the WEC Super Season will be the 6 Hours of Silverstone on Sunday 19 August at the home of British Motor Racing.